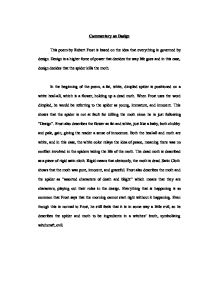 Commentary on Design by Robert Frost.

Commentary on Design This poem by Robert Frost is based on the idea that everything is governed by design. Design is a higher force of power that decides the way life goes and in this case, design decides that the spider kills the moth. In the beginning of the poem, a fat, white, dimpled spider is positioned on a white heal-all, which is a flower, holding up a dead moth. When Frost uses the word dimpled, he would be referring to the spider as young, immature, and innocent. This shows that the spider is not at fault for killing the moth since he is just following "Design". ...read more.

Satin Cloth shows that the moth was pure, innocent, and graceful. Frost also describes the moth and the spider as "assorted characters of death and blight" which means that they are characters, playing out their roles in the design. Everything that is happening is so common that Frost says that the morning cannot start right without it happening. Even though this is normal to Frost, he still feels that it is in some way a little evil, so he describes the spider and moth to be ingredients in a witches' broth, symbolizing witchcraft, evil. Essentially, the first stanza seems to narrate the event to us, but in the second stanza, Frost questions why the event happened and tries to give us a deeper explanation to what "design" truly is. ...read more.

In answer to this, I do not have to do much because Frost actually answers his own question in his third inquiry. His third question is rhetorical because he states that it is obvious that design is responsible for what happened. However, in the last line, he doubts his own statement by questioning if design in fact does govern in a thing as small as a simple killing of a moth by a spider. The images used in this poem are all mostly used to convey ideas of purity, evil, innocence, and death. Frost uses these because he wants to give the reader a sense of simple yet deadly design that we all follow whether we want to or not. ...read more.