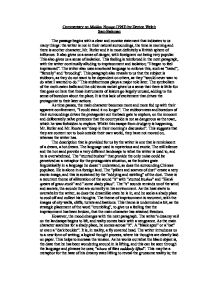 Commentary on Maiden Voyage (1943) by Denton Welch Sam Bateman The passage begins with a clear and concise statement that indicates to us many things: the writer is not in their natural surroundings, the time is morning and there is another character, Mr. Butler and it is most definitely a British sphere of influence. It also gives us a sense of danger, with foreigners not being very popular. This also gives us a sense of isolation. This feeling is reinforced in the next paragraph, with the writer continually alluding to imprisonment and isolation; "I began to feel imprisoned". The writer also uses emotional language to enforce this, such as "hated", "fiercely" and "brooding". This paragraph also reveals to us that the subject is stubborn, as they do not want to be dependent on others, as they "would never wan to do what I wanted to do." This stubbornness plays a major role later. The symbolism of the moth-eaten b***s and the old tennis racket gives us a sense that there is little fun that goes on here that these instruments of leisure go largely unused, adding to the sense of boredom about the place. ...read more.

He is alone in a foreign land. The "pillars and scarves of dust" create a very exotic image, and this is sustained by the "eddying and swirling" of the dust. There is a recurrent theme of alliteration of the sound "s" with "stunted bushes" and "Harsh spears of grass stuck" and "some shady place". The "s" sounds reminds us of the wind and secrets, the sounds that are currently in his environment. As the heat starts to overwhelm the writer, so does the dreamlike state he is in, and he seeks a shady place to cool off and collect his thoughts. The theme of imprisonment is recurrent, with the images of city walls, cliffs, turrets and bastions. This theme is undermined a bit, as the strategic placement of the word "crumbling", to give us a feeling that the imprisonment has been broken, that the main character has attained freedom. However, the mood changes with the next paragraph. The writer's dreamy veil on the landscape begins to lift, and realty comes back with a vengeance. As the main character searches for a shady place, he comes across "it". A "black spec" or a "cat" or even a "dark boulder". ...read more.

This paragraph is mainly devoted to the sheer horror that the writer is experiencing, as he previously was na�ve to the danger that the foreign country posed; now he is terribly aware of it. The next paragraph the writer becomes conscious of the daze he was in, just how much he was dreaming. The language turns from a flowery, descriptive type to a short, sharp and action packed sentences. This gives the feeling of urgency and imminent danger. The grass is described again, but this time in a much more sinister manner. The grass, instead of just being harsh, is instead rank and living shadow. This time the grass is compared to a knife, whereas before it was spears. This, combined with the shadows, gives us a sense of a hidden and lurking danger, one that we cannot foresee. Again, the noise that the insects make is focussed on. Their buzzing and slapping against the wall. It seems as if even the insects want to get into the compound as well, and are resorting to flying into the walls. It is ironic that at the beginning of the excerpt he so desperately wanted to escape the safety and boredom of the compound, whereas now he cannot get back in. ...read more.