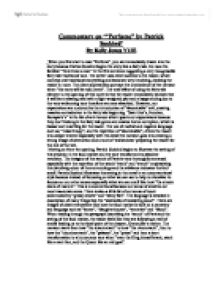 Commentary on '&quot;Perfume&quot; by Patrick Suskind'.

Commentary on `"Perfume" by Patrick Suskind' By Kelly Jones Y12E When you first start to read "Perfume", you are immediately drawn into the story because Patrick Suskind begins the story like a fairy tale. He uses the familiar "there lived a man" in the first sentence suggesting a very recognisable fairy tale traditional tone. The writer uses direct address to the reader, which conveys oral traditional storytelling and becomes very involving, drawing the reader in more. The direct address also portrays the omniscience of the narrator when "his story will be told (here)". The total effect of using the fairy tale element to the opening of this novel is that the reader immediately decides that it will be a relaxing read with a light-weighted plot and a happy ending due to the very welcoming tone therefore are more absorbed. However, our expectations are undercut by the introduction of "abominable" evil, creating massive contradiction to the fairy tale beginning. ...read more.

This is unconventional because our sense of smell is our most inaccurate sense. There is also a little bit of our sense of touch accentuated by "greasy sheets" and "slimy fish". The language is detailed in description of many things like the "stairwells of moldering wood". There are images of death everywhere like how the food market is built on a cemetery and language such as "bones", "slaughterhouses", "tanneries" and "blood". When reading through the paragraph describing the `stench' of Paris and the setting of the food market, the reader feels like they are following a trail of smells leading us to the focal point of the chapter, Grenouille's mother. The narrator starts from how "the streets stank" to how "the rivers stank", then to how the "churches stank", the "palaces", the "priest" and then a short transformation to a humourous tone when "even the King himself stank, stank like a rank lion, and the Queen like an old goat". ...read more.

they did not have the child shipped". Grenouille was born into a cruel and pitiless atmosphere were the outcome of a human being's life depended on one's "mood" and he was just a "trouble" to be taken care of. However, the tone changes slightly from horrific to religious when Grenouille gets accepted in the church almost as if he died and was reborn, giving hope. Already in this chapter, most readers can make assumptions on the rest of the novel because the smell, the way of life, society and poverty of Paris are all described as horrific, emotionless and abominable. All together they seem to be a big symbolic image and tone of how the rest of the novel will be like and what genre it will be. Readers already begin to suspect that Grenouille's life won't be very pleasant and when compared to the world he was born into, a world of corruption and cruelty, it is almost impossible for the reader to imagine Grenouille grow up to be a delightful, admirable man. ...read more.