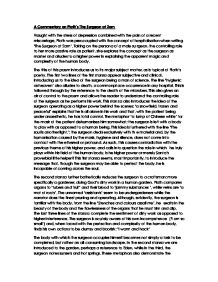 A Commentary on Plath's The Surgeon at 2am Fraught with the stress of depression combined with the pain of a recent miscarriage, Plath was preoccupied with the concept of hospitalisation when writing 'The Surgeon at 2am'. Taking on the persona of a male surgeon, the controlling role to her more passive role as patient, she explores the concept as the surgeon as master and alludes to a higher power in explaining the apparent magic and complexity of the human body. The title of this poem introduces us to its major subject matter, as is typical of Plath's poetry. The first two lines of the first stanza appear subjective and clinical, introducing us to the idea of the surgeon being a man of science. The line 'hygienic as heaven' also alludes to death, a commonplace occurrence in any hospital. This is followed through by the reference to the death of the microbes. This also gives an air of control to the poem and allows the reader to understand the controlling role of the surgeon as he performs his work. This stanza also introduces the idea of the surgeon operating as a higher power behind the scenes; 'a snowfield, frozen and peaceful' explains that he is all alone in his work and that, with the patient being under anaesthetic, he has total control. ...read more.

These metaphors also demonstrate the dehumanisation of the body on which he operates. The idea of an all-consuming task also comes through in the line 'I am up to my elbows in it': this gives the blood and body a more active role and gives almost the impression of it taking control of the surgeon, particularly in the line 'Still it seeps me up'. The surgeon appears almost reluctant to 'seal off' the mass of veins and leave the garden, perhaps insinuating that he feels more comfortable in his 'garden' than in the real world, where people are not merely bodies under a mask of 'white clay.' In the second part of the stanza, the surgeon rhapsodises about the skill of the Romans, showing his respect for logic and discipline. Proclaiming the body to be a 'Roman thing', he places it on the same pedestal as 'Aqueducts' and 'the Baths of Caracella', extolling its capacity for sensible routine (for example, in the pumping of the heart), while, curiously, paying little attention to its capacity for human emotion. We may perhaps infer from this that Plath felt dehumanised by her surgeons when hospitalised. The enigmatic last line 'It has shut its mouth on the stone pill of repose' refers perhaps to the body being in an anaesthetised state. ...read more.

Perhaps through the pain that induced surgery, they have undergone a sort of purgatory and hence their soul has been cleansed. Morphia makes reference both to morphine, as in the drug, and Morpheus, the Roman god of sleep and dreams, yet another reference to the Roman age. The surgeon seems puzzled by the after-effects of surgery; that under the 'gauze sarcophagi' lie individuals, floating on a morphine high. The 'dawn drafts' which Plath refers to further allow the reader to understand that the patients are, under the effect of morphine, floating inches from the ceiling. Making reference once again to an ancient society, the 'gauze sarcophagi' give the impression that the patients are, in their present state, neither dead or alive, in this ward where even the 'night lights' reminds the surgeon of human gore. The poem finishes much as it started, with the surgeon, having played the role of gardener, Historian and scientist, resuming his role of control as a higher being. 'I am the sun' indicates that the surgeon is the life-giving force in the hospital, most important for the continuation of the patients' lives. This too may refer to deities in ancient societies such as the Aztecs. The last line further cements everything we believe about the surgeon: safe in his position of power and control, he is happy only when the people around him are being bodies, in a 'shuttered' state, and acknowledging listlessly the power and magic of his work. ...read more.