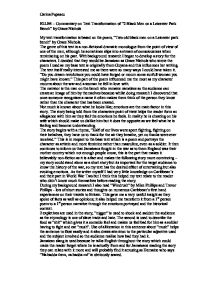 My text transformation is based on the poem, "Two old black men on a Leicester park bench" by Grace Nichols. The genre of this text is a non-fictional dramatic monologue from the point of view of one of the men, although he sometimes slips into a stream of consciousness when reminiscing on his past. With background research I began to develop a story for the characters. I decided that they would be Jamaican as Grace Nichols who wrote the poem I used as my base text is originally from Guyana and this influences her writing. The text itself really interested me as there were so many ways I could have taken it. "Do you dream revolutions you could have forged or mourn some sunfull woman you might have known." This part of the poem influenced me the most as my character mourns about the war and a woman he fell in love with. The narrator is the man on the bench who remains nameless so the audience can create an image of him by themselves because whilst doing research I discovered that once someone recognises a name it often makes them think of the person they know rather than the character that has been created. ...read more.

During my background research I also read "Windrush" by Mike Phillips and Trevor Phillips - lots of short stories and thoughts on numerous Caribbean's first hand experiences on their travels to Britain. This gave me a very useful insight as they spoke of facts as well as opinions; it also helped me transform it from a 1st person poem to a 1st person narrative through the emotions portrayed and the historical context. 2 expletives are used in the story, "n****r" is used to shock and sadden the audience as the etymology is one of slave trade and hate. The second is used to describe the food as "s**t" which gives it a comedic feel and makes us feel bad for him as a soldier having to fight and eat "mush". Use of alliteration in this sentence about "mush" helps the sentence to flow easily and it also draws attention to the particular adjective used and the subject involved so the audience realise how bad they had it. Jamaican slang is used because he talks English throughout the story which could make the reader forget where he is actually from and ...read more.

He only has good things to say about her and she also admits she is lonely so the audience feel for her and also understand her point of view although it is never shared from her. The tone is mostly informal as it's made up of his thoughts and feelings which create an intimate relationship between him and the reader as they see things through his eyes. Although there is humour there is also a very violent tone when her husband attacks her. This stuns the audience as it's a very serious twist, the syntax becomes simple to quicken the pace which makes the reader want to read on. The end paragraph sums the whole relationship up because although they aren't together - the memories lasted forever. I chose to end the story abruptly and without a "happy" ending as life is not like that in reality and the reader can relate to this, much like Grace Nichols left a hanging ending in her poem. Word Count: 1,100 ?? ?? ?? ?? Carina Popescu ELLB4 - Commentary on Text Transformation of "2 Black Men on a Leicester Park Bench" by Grace Nichols ...read more.