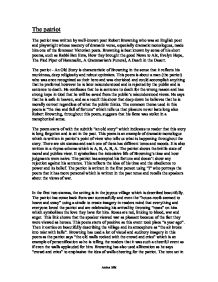 The patriot The patriot was written by well-known poet Robert Browning who was an English poet and playwright whose mastery of dramatic verse, especially dramatic monologues, made him one of the foremost Victorian poets. Browning is best known by some of his short poems, such as Rabbi Ben Ezra, How they brought the good News to Aix, Evelyn Hope, The Pied Piper of Hammelin, A Grammarian's Funeral, A Death in the Desert. The patriot - An Old Story is characteristic of Browning in the sense that it reflects his murkiness, deep religiosity and robust optimism. This poem is about a man (the patriot) who was once recognized as their hero and was cherished and could accomplish anything that he preferred however he is later misunderstood and is rejected by the public and is sentence to death. He confesses that he is sentence to death for the wrong reason and has strong hope in God that he will be saved from the public's misunderstood views. He says that he is safe in heaven, and as a result this show that deep down he believes that he is morally correct regardless of what the public thinks. The common theme used in this poem is "the rise and fall of fortune" which tells us that pleasure never lasts long also Robert Browning, throughout this poem, suggests that his fame was stolen in a metaphorical sense. ...read more.

The tone set in these two stanzas is of enjoyment and celebration. It then moves to a promise made by the crowd when he says "give me your sun from the yonder skies" although the task is surely impossible, the crowd replies in agitation "And afterward, what else?" this shows the reader that the crowd highly appreciates and respects the patriot and would go to any level to give him whatever he demands. It shows the enormous faith and belief he could raise a year ago. The increasing positive tone in the first two stanzas reflects and shows that the speaker enjoyed being viewed as this. In the third stanza, the patriot seems to feel that his country didn't give as much to him as he did. There is a feeling of sorrow in him as he says "Alack, it was I who leaped at the sun" this informs the readers that although he asked for the sun it looked like to him that he was the one who gave the sun to his country, he fought the war for them "To give it my loving friends to keep", keeping it safe and protecting it for his friends and people of his country. Browning has also used personal pronoun in this stanza as the patriot says "I" and "my". The patriot is proud of himself, he feels as though he did everything for his country what others couldn't do. ...read more.

The poem represents how views changed from fighting the war and being overvalued to criminal after the war when the deeds which were once glorified were reviewed and seen as bad, therefore now being held as a criminal. Although he has been crucified at the shambles gate and the false indecisiveness shown by the crowd, the patriot has still optimistic faith that he will be protected in heaven, this informs the readers, poet's strong hope and deep faith in god. There is also a use of alliteration which emphasizes people have stop believing in him since he describes them as "drop down dead". In the opening line of the last stanza, "Thus I enter and thus I go." The poem finishes off with the idea that while the public might not be able to be consistent with its honor, the patriot himself knows that god will give him an appropriate judgment and he shall be much safer in heaven. The whole poem tells the readers that even a highly respectable character can fall from grace within the short time of a year as well as the outwardly easy conversion from hero to villain. This poem have few meanings, but the most important one of them is the false opinion and views of the public. The Patriot by Robert Browining contrast how things can quickly change, this poem has a clear moral, complacency is what you should not easily set in. this poem is very effective in evoking the passionate feelings and purpose across to the readers. Amina Bibi ...read more.