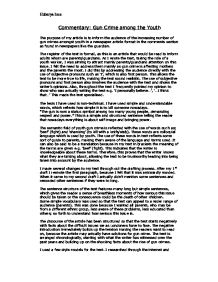 Commentary: Gun Crime among the Youth The purpose of my article is to inform the audience of the increasing number of gun crimes amongst youth in a newspaper article format in the comments section as found in newspapers like the guardian. The register of the text is formal, as this is an article that would be read to inform adults whom are parents/guardians. As I wrote the text, taking the role of a youth worker, I was aiming to attract mainly parents/guardians attention on this issue. I felt the need to address them mainly as gun crime is affecting mothers and the parents the most. I did this by addressing the audience directly with the use of subjective pronouns such as 'I', which is also first person. This allows the text to be more true to life, making the text sound realistic. The use of subjective pronouns and first person also involves the audience with the text and shows the writer's opinions. ...read more.

'beef' (fight). This indicates that the writer is knowledgeable about these terms. Therefore, this proves that the writer knows what they are talking about, allowing the text to be trustworthy leading into being taken into account by the audience. I made several changes to my text through out the drafting process. After my 1st draft I rewrote the first paragraph, because I felt that it was awkwardly worded. When it came to my second draft I actually didn't mention some sentences and reworded other sentences if they were to long. The sentence structure of the text features many long but simple sentences, which gives the reader a sense of breathless moments of how serious this issue should be taken or the consequence could be the death of other children. Some simple vocabulary was used so that the text can appeal to a wider range of audience (parents). This was done because I wanted all parents, who may be from a different ethnic group, less aware of these problems, less educated than others; so forth to understand how serious this issue is. ...read more.

This was important to me because I could then pick out the factors that where mentioned the most and appeared the most in style models. Using my style models I was looking for graphology, which there wasn't much, the style, vocabulary and sentences used, and the layout. This was vital for my article because even the type of font you use can reflect how serious the writer is about the issue and to what extent should the audience take it. The style models did not use complicated long vocabulary which must indicate that the text is for a wide range of parents/guardians. The tones of the style models were very straight to point, putting its message across. The article is brought to a conclusion by discussing what means necessary do we need to take to tackle a problem like this. The exclamation mark at the end puts a full stop to the text and makes the phrase more memorable and emphasises on the end point. Telling the readers no one will ever know who you are."! ?? ?? ?? ?? Huberya Ince ...read more.