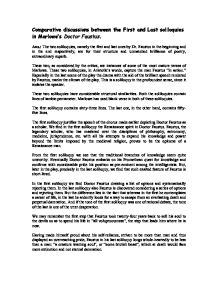 Comparative discussions between the First and Last soliloquies in Marlowe's Doctor Faustus.

Comparative discussions between the First and Last soliloquies in Marlowe's Doctor Faustus. Ans.: The two soliloquies, namely the first and last ones by Dr. Faustus in the beginning and in the end respectively, are for their structure and unmatched brilliance of poetry, extraordinary superb. These two, as considered by the critics, are instances of some of the most mature verses of Marlowe. These two soliloquies, in Aristotle's words, capture the man Faustus "in action." Especially in the last scene of the play the drama with the aid of the brilliant speech rendered by Faustus, marks the climax of the play. This is a soliloquy in the profoundest sense, since it isolates the speaker. These two soliloquies have considerable structural similarities. Both the soliloquies contain lines of iambic pentameter. Marlowe has used blank verse in both of these soliloquies. The first soliloquy contains sixty-three lines. The last one, in the other hand, contains fifty-five lines. The first soliloquy justifies the speech of the chorus made earlier depicting Doctor Faustus as a scholar. We find in the first soliloquy the Renaissance spirit in Doctor Faustus. ...read more.

We may remember the first step that Faustus took twenty-four years back to sell his soul to the devils so as to spend his life in "all voluptuousness", the step that leads him where he is now. Having made himself proud about his self-reliance, striven to be more than man and thus displayed an overreaching pride, Faustus in his last soliloquy longs whole-heartedly to be less than a man: "a creature wanting soul", or "some brutish beast", which at death would face mere extinction and not eternal damnation. That time plays an interesting role in the intellectual life of Faustus, which in passes through a gradual degeneration, is notable. The last soliloquy records his hopeless attempt to put to the constant of the working universe: "that time may cease and midnight never seems." The grim dramatic irony in Faustus's utterance unfolds itself, as we hear, with Faustus, time contracting: "a year, a month, a week, a natural day." This predicament of Faustus reminds us of the first scene where he had the prospect of being granted endless time. ...read more.

There is also another difference between Faustus's first and last soliloquy. The first soliloquy is made by a man for whom aspiration is the guiding force and whose vision is not colored by reality but dyed with optimism. But, to the contrary, the last soliloquy is that of a man to whom crude reality is grimly exposed at the f*g end of his life and for whom frustration is the only possibility. In spite of all these, Faustus maintains to the end the individuality of mind. This retention of individuality is at once, as we have observed, in the first and last soliloquies, Faustus's glory and damnation. In the first soliloquy, Faustus was full of optimism. In the last soliloquy, he is all despair. If we judge from the Christian point of view, the reason of Faustus's damnation is despair, which is a Christian sin. But if we judge by a human and secular point of view, the damnation of Faustus is the dilemma of a heretic who tried to the limitations of mankind. The two soliloquies are in fact the microcosmic reflection of the whole play. ...read more.