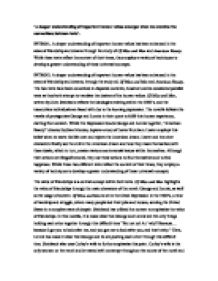 Comparative Essay. A deeper understanding of important human values has been enhanced in the areas of friendship and dreams, through the study of, Of Mice and Men and American Beauty.

Not some h***y geek boy..." The visual technique of colour helped to influence audiences' opinions' of characters and events by alerting them on how to feel and what to expect. One of the first scenes, Lester is shot looking out the window of his house at his wife, and the blinds on the window represent jail cell bars. Even the blocks of text on his computer screen at work represent jail cell bars. Lester is "in jail" because his life at this point is so empty and missing substance. This scene is metaphoric in the way it is shot, in which the frame symbolizes a higher, deeper meaning of Lester's isolation. Friendship is also demonstrated when Carolyn cries and grabs Lester's clothes after she finds him dead. Even after such a terrible marriage, she realizes how much worse life will be without him. The director of the film emphasizes the lack of important human values, companionship and accountability were the very cause of Lester's death. Lester appears to have a great job, big house, a loving family, however in reality if the audience just "look closer", can see that his life is filled with misery. ...read more.

Then the camera show's Lester's face, which seems to completely in awe of her beauty. When she reaches to undo her shirt, the seduction, l**t symbolising rose petals appear, covering her nakedness. The more unhappy the characters in the film, the more we can see they cover reality with an illusion. Carolyn believes that the most important thing in life is success, and appearing successful, in which the American Dream suggests. She attempts to be happy through her career as a real estate agent. In a scene in which she cannot sell a house, she abuses herself mentally and physically she cries, screams, and slaps herself in the face. All day she had cleaned the house and repeated maniacally to herself, "I will sell this house today." Lester's wife is extremely materialistic and frustrated with her husband. In one scene where the two are not yelling or nagging at each other, but as the camera focuses onto the beer which Lester was holding, Carolyn tells Lester that he's going to spill beer on her precious $4,000 couch which he considers as 'stuff'. Both texts have made it clear that their respective dreams are what motivate the characters to survive and the belief that reaching that dream since it will lead to their individual freedom or disaster. ...read more.