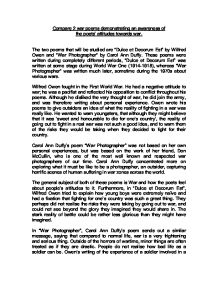 Compare 2 war poems demonstrating an awareness of the poets' attitudes towards war.

Compare 2 war poems demonstrating an awareness of the poets' attitudes towards war. The two poems that will be studied are "Dulce et Decorum Est" by Wilfred Owen and "War Photographer" by Carol Ann Duffy. These poems were written during completely different periods, "Dulce et Decorum Est" was written at some stage during World War One (1914-1918), whereas "War Photographer" was written much later, sometime during the 1970s about various wars. Wilfred Owen fought in the First World War. He had a negative attitude to war; he was a pacifist and reflected his opposition to conflict throughout his poems. Although he disliked the very thought of war, he did join the army, and was therefore writing about personal experience. Owen wrote his poems to give outsiders an idea of what the reality of fighting in a war was really like. He wanted to warn youngsters, that although they might believe that it was 'sweet and honourable to die for one's country', the reality of going out to fight in a real war was not such a good idea, and to warn them of the risks they would be taking when they decided to fight for their country. Carol Ann Duffy's poem "War Photographer" was not based on her own personal experiences, but was based on the work of her friend, Don McCullin, who is one of the most well known and respected war photographers of our time. ...read more.

The effect of this quote is that the soldiers were so absorbed in their jobs that they ignored almost everything that happened as to them, it seemed irrelevant. In "Dulce et Decorum Est" there are many excellent uses of imagery. A good example is "Bent double, like old beggars under sacks, / knock-kneed, coughing like hags..." this line is very interesting as it uses poetic techniques to convey many meanings. It describes how tired and worn out the soldiers were from fighting for their country, and not having enough sleep. It also gives the impression that the soldiers were begging for their lives. In this line, Owen has used a simile to describe the soldiers, and has also used alliteration with "knock-kneed". Another example of Owen's imagery is the reference to a "thick green light", which he uses to describe a gas attack. The actual gas was green, and Owen was trying to help the reader obtain an image of the scene in their mind. "As under a green sea" shows that it resembled a green blur, as everyone was panicking and was shocked. There are also many uses of imagery in "War Photographer" e.g. "a hundred agonies in black and white". This refers to the many pictures in the newspapers of injured soldiers, and their families who are in pain, also suffering their losses. ...read more.

"Home again / to ordinary pain" and "he remembers the cries / of this man's wife". The mood of "Dulce et Decorum Est" changes quite frequently throughout the poem. It starts off when everyone felt dull and tired, "Men marched asleep", "But limped on, blood-shod". Deeper into the poem the mood changes instantly to excitement, everyone was rushing around, "An ecstasy of fumbling, / Fitting the clumsy helmets just in time". Quickly again, the mood changes and Owen becomes angry and upset. "His hanging face, like a devil's sick of sin". Throughout the poem Owen gets more and more bitter and angry. The mood of "War Photographer" stays the same throughout, sad, painful, emotional and infuriated. This illustrates that life as a soldier is never happy or fun and it is always gloomy and depressing. It teaches the reader not to expect any exciting events or new, fun moments. To conclude, both poems are very different, in that one is from the point of view of an actual participant and the other is by a detached observer, however they send out a similar message. Owen was a pacifist who hated war and from his poem, he shows the readers why. Tragically he was to die towards the very end of the war. Duffy reminds readers of the horror of war, and warns not to take life for granted and to think about others. ...read more.