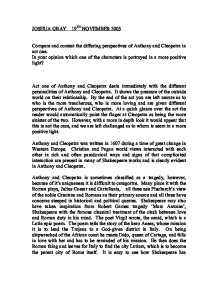 Compare and contest the differing perspectives of Anthony and Cleopatra in act one.In your opinion which one of the characters is portrayed in a more positive light?

He is unable to reconcile the two, their fundamental incompatibility are emphasized by the commentary provided by Philo and Demetrius. When Anthony and Cleopatra appear before us they are beautiful in their excess. They are a grand, godlike couple, a handsome Roman general and a magnificent queen, playful and exuberant, and conscious of their glamour. Anthony revels in his Egyptian life as a respite from a lifetime of fighting wars. Anthony proudly proclaims "we stand up peerless" and within a certain realm he is right, but the world where they stand up peerless is different to Rome's world of duty of war and ambition. After all, Anthony is Roman and should not forget this. The couple's beautiful language and delight in one another make no great impression on Philo and Demetrius, who fail to understand Anthony's evasion of his duties. In Act ll we are given a far more dignified view of Anthony. He is noble in repenting his sins. He hears the messenger and finally hears the news that he has been quoting. Anthony sees the cost of the neglect of his duties and he is immediately remorseful, owning up to his faults he encourages the messenger to inform him of all the bad news without fear. ...read more.

CONCLUSION Throughout the play we are given many different perspectives of Anthony and Cleopatra. We are shown how Anthony can be tempted by the exotic frontier of Egypt and Cleopatra; while he is in Egypt he can forget all his worries. In Egypt he can be a sort of King and self indulge. In Rome he is treated as an equal. When in Rome he reverts back to his warlike self. He is a man torn between Egypt and Rome, duty and passion, political ambition and love. He is clearly divided and unsure about what he really wants. He is seen by Romans, not as a traitor, but as someone who has succumbed to Cleopatra. Albeit Anthony's love for Cleopatra is genuine. Cleopatra is perceived by many as a w***e, because of her past, she is frowned upon by the Romans who know nothing apart from war and duty, Cleopatra is in a world of her own and knows nothing apart from the Egyptian way of life of luxury and passion. Act 1 shows a clash of cultures and the struggle to cope in a relationship between such diverse emotions. Therefore I feel that because of their polar differences neither Anthony or Cleopatra can be seen in a more positive light to one another and I therefore cannot give a definitive answer. ...read more.

The writer has made many valid points about the two characters in Act 1, though there is some doubt about whether secondary sources have been quoted without being acknowledged.
This, together with the misspelling of names, misquotations and inaccurate grammar, means that only *** can be awarded.