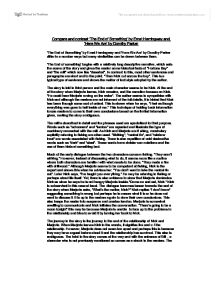 Compare and contrast 'The End of Something' by Ernst Hemingway and 'Here We Are' by Dorothy Parker 'The End of Something' by Ernst Hemingway and 'Here We Are' by Dorothy Parker differ in a number ways but many similarities can be drawn between them. 'The End of something' begins with a relatively long descriptive narrative, which sets the scene of the story and gives the reader some historical facts of "Hortons Bay" and "the mill" which now lies "deserted". In contrast to this, most other sentences and paragraphs are short and to the point. "Then Nick cut across the bay". This is a typical type of sentence and shows the matter of fact style adopted by the author. The story is told in third person and the main character seems to be Nick. At the end of the story when Marjorie leaves, Nick remains, and the narration focuses on Nick. "He could hear Marjorie rowing on the water". The author seems to sympathise with Nick and although the readers are not informed of the full details, it is hinted that Nick has been through some sort of ordeal. This is shown when he says, "I feel as though everything was gone to h**l inside of me." This technique of holding back information forces readers to come to their own conclusions based on the limited information given, making the story ambiguous. ...read more.

This also is ambiguous. The twist in the story comes at the very end with the entrance of Bill, a character who is not previously mentioned so comes as a shock to the readers. The most significant line is "Bill didn't touch him, either" this hints that Bill and Nick are close to each other and perhaps in a relationship. "Here we are" is also third person narration but as in "the end of something" the author seems to sympathise and focus on the male character rather than the female. This is evident as the man is described first, "The young man in the new blue suit", and the girl is described through the eyes of the man. "He sat down...opposite the girl in beige." The style is colloquial and the words used are simple. There is a distinct difference in the two stories. "Here we are" contains very little narrative, apart from the primary paragraphs. The dialogue between the man and the girl form the bulk of the story and through their conversation, the readers are able to form opinions of them. The writer is American and the story is set on a train bound for New York and the use of expressions such as "knockout", "gee" and "q***r" words typical of that time in America, reflects this. The dialogue is sometimes overly polite and the characters seem insincere. ...read more.

are used to divert the exchange. The dialogue is swift and the lack of narrative makes the story fast paced. However, when the narrative interrupts the dialogue it creates tension and slows the pace. Sentences such as "There was silence with things going on in it" are ambiguous. The train journey signifies the beginning of the couple's marriage and the reiteration of the word "new" emphasises this. This is the opposite of Nick and Marjorie's relationship, which is ending. The story has no twist, unlike 'The End of Something', but the fact that the end "Here we are" is the same as the beginning and the title, shows that nothing has been resolved. The two stories are very ambiguous and the authors invite the readers to read between the lines and make their own conclusions. Terminology is used to illustrate the machinery and fishing in 'The End of Something' but words are not specialised in 'Here we are', although idioms are used. Nick and Marjorie have been together for a long time and are comfortable with each other, but their relationship is coming to an end. In 'Here we are' the man and girl are newly wed and in a new and unfamiliar relationship. The train journey is the journey into married life, which has only just begun for them. In both stories, there is suspense and tension throughout brought on by the language, style and dialogue between the characters. The language used and how the characters respond to each other allows us to form informed opinions of them. ...read more.