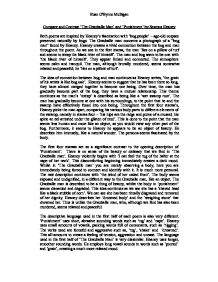 Compare and Contrast 'The Grauballe Man' and 'Punishment' by Seamus Heaney Both poems are inspired by Heaney's fascination with 'bog people' - age-old corpses preserved naturally by bogs. The Grauballe man concerns a photograph of a "bog man" found by Heaney. Heaney creates a vivid connection between the bog and man throughout the poem. As we see in the first stanza, the man 'lies on a pillow of turf and seems to weep the black river of himself'. The man and bog seem to be one with 'the black river of himself'. They appear linked and connected. The atmosphere seems calm and tranquil. The man, although brutally murdered, seems somewhat relaxed and peaceful; he 'lies on a pillow of turf'. The idea of connection between bog and man continues as Heaney writes, 'the grain of his wrists is like bog oak'. Heaney seems to suggest that he has been there so long, they have almost merged together to become one being. Over time, the man has gradually become part of the bog; they have a mutual relationship. This theme continues as the man's 'instep' is described as being like a 'wet swamp root'. The man has gradually become at one with his surroundings, to the point that he and the swamp have effectively fused into one being. ...read more.

The verbs used are forceful and aggressive such as, 'tug', 'shake' and 'drowned'. This all amounts to create a feeling of tension, aggression and unease. The language used in the first half of 'The Grauballe Man' is very dissimilar. Heaney uses longer, smoother sounding words. He employs long vowel sounds in words such as 'poured' and 'grain', creating a much more relaxed mood. This relaxed mood, however, is abruptly broken as Heaney unexpectedly uses the phrase 'slashed throat'. It is a stark contrast to the language we have heard up to this point. So far, the language used has been smooth and gentle, opposite to the harsh, coarse sounding 'slashed throat'. It completely breaks the atmosphere of the poem. The harsh sounds emphasise the brutality of the wound. This continues with 'tanned and toughened'. Yet this is only a brief lapse in mood, as the poem reverts to its previous state. The language is again calm. Heaney manages to find beauty in even the most brutal element of the man with 'the cured wound opens inwards to a dark elderberry place'. He sees rich, deep colour in the savage wound. Both poems experience similar changes in focus half way through. The focus changes from just description to thought and consideration of the described. ...read more.

Heaney describes himself to 'connive in civilized outrage, yet understand the exact and tribal, intimate revenge'. Although he would appear to be outraged, he says he understands the 'tribal' revenge. The use of the word tribal is also very significant; as there were tribes hundreds of years ago at the time of the dead girl, there are now - Catholics and Protestants. He is consumed by guilt at the sight of the brutalised corpse, as he sees he is no better than those who killed the girl. In much the same way, Heaney also relates 'The Grauballe Man' to modern day Ireland. As we see with 'hung in the scales...with the dying Gaul...with the actual weight of each hooded victim slashed and dumped' he compare death of a warrior Gaul with the futile, anonymous deaths of present day sectarian victims. Both poems follow this format, ending by relating the bodies to modern day Ireland. Both poems are concerned with the cyclical nature of humanity. Heaney aims to show that although societies change and we develop fraudulent notions of how civilized we are, we remain intrinsically the same. We are always capable of committing the most horrific acts of brutality. He is trying to tell us that there will always be fighting tribes and they with never differ hugely. Images from two thousand years ago match perfectly with the headlines of Ireland in the period of the Troubles. Euan O'Byrne Mulligan ...read more.