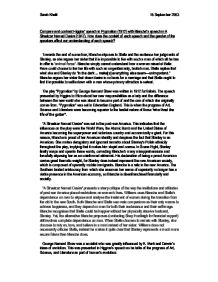 Compare and contrast Higgins' speech in Pygmalion (1912) with Blanche's speech in A Streetcar Named Desire (1947). How does the context of each speech and the gender of the speakers affect our understanding of each speech?

Compare and contrast Higgins' speech in Pygmalion (1912) with Blanche's speech in A Streetcar Named Desire (1947). How does the context of each speech and the gender of the speakers affect our understanding of each speech? Towards the end of scene four, Blanche exposes to Stella and the audience her judgments of Stanley, as she argues her sister that it is impossible to live with such a man of which all he has to offer is "animal force". Blanche simply cannot understand how a woman raised at Belle Reve could choose to live her life with such an ungentlemanly, brutish man. Stella replies that what she and Stanley do "in the dark ... make[s] everything else seem-unimportant." Blanche argues her sister that sheer desire is no basis for a marriage and that Stella ought to find it impossible to settle down with a man whose primary attraction is s****l. The play "Pygmalion" by George Bernard Shaw was written in 1912 for Britain. The speech presented by Higgins to Eliza about her new responsibilities as a lady and the difference between the new world she was about to become part of and the one of which she originally comes from. "Pygmalion" was set in Edwardian England. This is when the progress of Art, Science and Literature were becoming superior to the b*****l nature of those "who lived the life of the gutter". ...read more.

Marx and Darwin's ideas of evolution. This was presented in Higgins's speech as he talks of the progress of Art, Science, and Literature as part of human's evolution: "...You can taste it and smell it without any training or any work. Not like Science and Literature and Classical Music and Philosophy and Art." In this evolution, only those who could have access to a "higher" way of living were the survivors. Higgins's speech is very parallel to Blanche's. She also speaks of the "new progress". Blanche labels Stanley as the "Survivor of the stone age". She notifies her sister of the progress that mankind has achieved through "things such as art- as poetry and music-" of which Stella cannot take part off if she stays with Stanley. Blanche believes that humankind has evolved too far past the "beast" that Stanley is and that her sister has reduced herself too much to become on his level. Blanche's speech articulates Williams's examination of the widely held belief among plantation owners and their descendants that the end of the South's agrarian culture led to a decline of American civilization. He depicts Blanche as an antiquated relic of a dead society, while Stanley epitomises the new type of American, who lacks refinement, education, and spirituality. ...read more.

On the other hand, in Blanche's speech (of which contained the same contents) we as audience perceive it in a different way to the way we perceive Higgins's speech. This is because she is a needy, vulnerable and fake female character who sees herself to be superior to others. The language she talks in may be passionate but has a sense of sarcasm and shows us that she has no authority, for this reason we do not take in everything she says for granted, even thought Williams provides to us a lot of evidence to support her judgement of Stanley; his b*****l behaviour "licking his lips" and his secret predatory actions "he turns stealthily", but we do not completely accept her judgments as she is a dependant woman who is financially, emotionally and mentally unstable and always "...relied on the kindness of strangers". Blanche becomes defeated as she looses her sister to Stanley. The new world and the American dream also wins over her as the fact that she once came from a middle class family gives her no superiors to those living in New Orleans. Higgins too looses the lady that he made, as Eliza becomes a reveal to Higgins. She also clashes with the male dominated society she lives in, as she becomes the breadwinner of her husband and her father. She, contrasting to Stella and Blanche becomes financially and emotionally independent. Sarah Khalil 15 September 2003 ...read more.