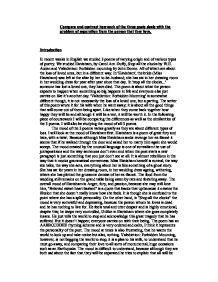 Compare and contrast how each of the three poets deals with the problem of separation from the person that they love.

Compare and contrast how each of the three poets deals with the problem of separation from the person that they love. Introduction In recent weeks in English we studied 3 poems of varying origin and of various types of poetry. We studied Havisham, by Carol Ann Duffy, Stop all the clocks by W.H. Auden and Valediction: Forbidden mourning by John Donne. All of which are about the loss of loved ones, but in a different way. In 'Havisham', the bride (Miss Havisham) was left at the altar by her to-be-husband; she has sat in her dressing room in her wedding dress for year after year since that day. In 'stop all the clocks...' someone has lost a loved one, they have died. The poem is about what the person expects to happen when something so big happens in life and everyone else just carries on like it's another day. 'Valediction: Forbidden Mourning' is somewhat different though, it is not necessarily the loss of a loved one, but a parting. The writer of this poem wrote it for his wife when he went away; it is about all the good things that will come out of them being apart. ...read more.

The mood is difficult to understand, because although they are both sad about the fact that they will be separated he tries to explain that all will be better when they are re-united than things are now. It is almost a mood of anticipation. How he can not wait till the day he returns and the utter happiness that he will feel. The use of language in Havisham is so unusual and controversial that it gets to the point where it almost makes no sense. The use of oxymorons and enjambment is used to the extreme and some of the metaphors are disturbing, this may reflect Carol Ann Duffy's state of mind, as she is a feminist who tries to "cast down the shackles of male oppression" by her use of illiteral grammar and lack of rhyme scheme to reflect her own incoherent thoughts. The way she compares Miss Havisham's eyes to green pebbles, green being the "colour" of envy and jealousy implying that she is morbidly jealous of other more fortunate women. Also the "ropes on the back of my hands" that she says she is going to strangle her ex-fianc� with, the ropes being wrinkles, a sign of just how long she has been in that situation. ...read more.

This symbolises that their love is greater than earth quakes, but their parting will not harm them. The grammar in this poem is standard, and there is no rhyming scheme. He shows that great feelings can be achieved through just writing from the heart. The form relates to the subject of the poem, because in separation, nothing unexpected will happen to them. Conclusion I think that although "Havisham" is the shortest and most controversial of the three poems it is the best. It is so surreal and unusual. The way Duffy turns Havisham into a monster bent on revenge then turns her back into an innocent girl who has been abandoned by the only person she ever loved is sheer genius. Although "Valediction..." is very deep and thoughtful it just does not compare to the outrageousness of "Havisham" and "Stop all the clocks" is just boring compared to this. I think Havisham has to be one of the best poems I have ever read. I think that what makes "Havisham" my favourite though is the fact that is so fresh. I don't know how Duffy came up with such an awe inspiring poem but if I had to pick a poem to read for the rest of my life, "Havisham" would be unquestionably it. By Max O'Neill 10LEE ...read more.