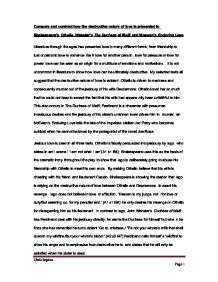 Compare and contrast how the destructive nature of love is presented in Shakespeares Othello, Websters The Duchess of Malfi and Mcewans Enduring Love

Compare and contrast how the destructive nature of love is presented in Shakespeare's Othello, Webster's The Duchess of Malfi and Mcewan's Enduring Love Literature through the ages has presented love in many different forms; from friendship to l**t or platonic love to romance. Be it love for another person, love for pleasure or love for power; love can be seen as an origin for a multitude of emotions and motivations. It is not uncommon in literature to show how love can be ultimately destructive. My selected texts all suggest that the destructive nature of love is evident. Othello is driven to madness and consequently murder out of the jealousy of his wife Desdemona; Othello loved her so much that he could not bear to accept the fact that his wife had apparently been unfaithful to him. This also occurs in The Duchess of Malfi; Ferdinand is a character with presumed incestuous desires and the jealousy of his sister's unknown lover drives him to murder. Ian McEwan's Enduring Love tells the tale of the hopeless stalker Jed Perry who becomes suicidal when he cannot be loved by the protagonist of the novel Joe Rose. Jealous love is seen in all three texts. Othello is falsely persuaded into jealousy by Iago who states in act I scene I 'I am not what I am'(A1 s1 l64); Shakespeare uses this as the basis of the dramatic irony throughout the play to show that Iago is deliberately going to abuse his friendship with Othello to meet his own ends. By making Othello believe that his wife is cheating with his friend and lieutenant Cassio, Shakespeare is showing the reader that Iago is relying on the destructive nature of love between Othello and Desdemona to exact his revenge. ...read more.

Othello makes this quote after striking Desdemona which therefore proves his decline in good nature. The use of animal imagery Othello uses to describe Desdemona suggests that she is incapable to love him because animals do not know how to love. This is also used in The Duchess of Malfi where Ferdinand talks of the Duchess' and her children's deaths 'The death/Of young wolves is never to be pitied.' Shakespeare and Webster use this technique to make the Duchess and Desdemona seem inhuman and incapable of love. Bosola's love for power affects his good nature in the same way as Othello; he was forced to be an instrument in the death of an innocent person against his will, 'Faith, end here/And go no further in your cruelty'(A4 s2 l13). Bosola contradicts his own philosophy of the superficiality of people and how they shouldn't try to be something they're not which is exactly what he does when he familiarises himself with Ferdinand, however Bosola claims to be a good person when he realises the guilt of killing her and acknowledges he has merely "painted honour". When the Duchess stirs he begs her to 'Return fair soul from darkness, and lead mine out of this sensible h**l!' no matter how desperately he begs to redeem himself, she still dies. Bosola is then led to thinking that the only way he can make up for is evil is to kill Ferdinand. This shows once again a character resorting to violence which had originated from his love for power. Love destroys relationships with multiple characters in the texts. Othello loses friendship with Cassio, The brothers don't treat the Duchess like their sister when she falls in love with Antonio; although I think this is because the Brothers ...read more.

The close connection to death and religion suggests God's love can be destructive as the Duchess and Jed both have prerequisites with God before they feel they are allowed to die. The Duchess makes a statement of going on her knees so she can enter heaven in the last moments before her own death. Similarly to when Jed says 'Please let me have this. I'm going to do it anyway. Let me have this one thing from you. Forgiveness, Joe. If you forgive me, God will too.' Shakespeare and Webster use the destructive nature of love to help provide structure to each play. In The Duchess of Malfi the play does not stop when the Duchess is dead. Webster continues the play regardless of the main character not being alive; this is because Bosola drives the play on by exacting his revenge for the deaths that the Cardinal and Ferdinand are responsible for. Similarly, Iago drives the play of Othello. He relies on his friendship with the Moor and his jealous character to bring him to his downfall. Without Iago's sabotage to Othello's relationship with Desdemona the play would have no structure. Love is an extremely deep and ambiguous concept. Love itself is a cause for different emotions and motivations. Each of the three texts uses the destructive nature of love to create motivation, ambition and atmosphere through a variety of literary techniques. When considering these three texts individually, the destructive nature of love allows Ian McEwan to create a satisfying climax, Shakespeare to incorporate the power of manipulation and Webster to drive a play on without the protagonist. Without the destructive nature of love none of the main characters of The Duchess of Malfi, Othello or Enduring Love would have the motivation to fulfil the roles in their respective texts. ...read more.