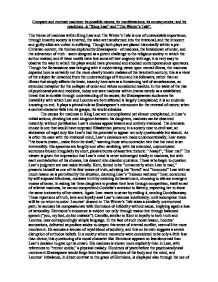 Compare and contrast madness: its possible causes; its manifestations; its consequences; and its resolution, in King Lear and The Winters Tale

Compare and contrast madness: its possible causes; its manifestations; its consequences; and its resolution, in "King Lear" and "The Winter's Tale". The theme of madness within King Lear and The Winter's Tale is one of unavoidable importance; through insanity society is inverted, the wise are transformed into the irrational, and the innocent and guilty alike are united in suffering. Though both plays are placed historically within a pre-Christian context, the themes explored by Shakespeare - of madness, the breakdown of order, and the subversion of truth - seem designed as a potent challenge to the religious society in which the author resided, and if these motifs have lost some of their cogency with age, it is very easy to observe the way in which the plays would have provoked and shocked contemporaneous spectators. Though the Renaissance was bringing with it modernizing views upon mental illness, the madness depicted here is certainly not the more clearly known malaise of the twentieth century; this is a view of the subject far detached from the understandings of Freud and his followers; rather than an illness that simply affects the brain, insanity here acts as a threatening veil of senselessness, an extended metaphor for the collapse of order and values considered resolute. In the wake of the rise of psychoanalysis and medicine, today one sees madness within drama merely as a established threat that is curable through understanding of its causes; for Shakespearean audiences the instability with which Lear and Leontes are both affected is largely unexplained; it is an endemic knowing no end. ...read more.

Gloucester references this suffering, speaking of gods who "kill us for their sport." This arbitrary world of capricious cruelty, a "vision of humanity's absurd and alienated condition" (Graham Martin/Stephen Regan) indicates Shakespeare's possible views on a godless universe. If Shakespeare's times reflected the common belief in one God as the exclusive source of moral truth, the domain explored within Lear shows an absence of this righteousness. The concept strikes a parallel with the statements of Dostoyefsky's Ivan Karamazov; as the character expresses two-hundred years later in The Brothers Karamazov, while a world with divine authority means an unbreakable obligation to morality, a world without innate goodness means that we are to be bound only by inclination. As the oft-misquoted excerpt from the novel reads: "if God does not exist, all is permitted." Threatening Christian beliefs over the sanctity of God's order, Shakespeare replaces godly benevolence with a pre-Christian, tribal world of undefined morals based upon the ancient myth King Leir of Britain, and leaves behind a godless universe of absurdism leaving man alone in nature, with only sacrifice as redemption. The madness of this universe is extended furthermore to the weather as Shakespeare utilizes pathetic fallacy in the fall of society; Gloucester notes "late eclipses in the sun and moon," while Lear suffers surrounded by rain and thunder, symbolizing the tremulous attributes of his mental faculties. His speech is marked by feverish qualities; he asks emptily "does any here know me?", endlessly questioning and repeating himself, later edging towards the brink of tears: "no, I'll not weep." ...read more.

While one man has gone mad with jealousy, the audience can be reassured that the world remains coherent, and that goodness (as it does) will reemerge. In Lear this is not as clear, and it truly does seem that there can be no solace for the suffering. Of course a reversal of roles can be seen in Perdita's upbringing as a girl of peasantry, but this exchange is used not as an example of suffering, like in Lear, but as a symbol of purity, and full reversals like this cannot be found elsewhere. Leontes' shift of mind is a diametric one; he goes from a position of balance to one where he believes his wife has acted unfaithfully and his friends have betrayed him, and his language is characterized by denial (the triple negative polysyndeton of "nor night, nor day, no rest," showing fragmentation of the senses). However, this reversal is unable to spread across society as it does in Lear. Truth may be kenneled, "honesty and honour locked up", but only temporarily. The two plays here are analogous in their use of themes, and both explore madness and its effects upon civilization. It expands from a disorder of the mind to a disease that infects all society; in Lear this is more extreme, whereas in The Winter's Tale it is less effectual. To different extents they both show nature reversed in terms of traditional roles, morality and order, and depict chaos as something brought on by poor, irrational decisions. In King Lear and The Winter's Tale, madness is a cause of suffering and the undermining of reassuring order. ...read more.