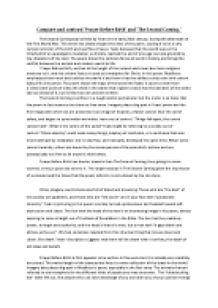 Compare and contrast 'Prayer Before Birth' and 'The Second Coming'

﻿Compare and contrast 'Prayer Before Birth' and 'The Second Coming.' The Second Coming was written by Yeats in the early 20th century, during the aftermath of the First World War. This event has clearly shaped the view of the poem, causing it to be a very cynical reminder of the birth and sacrifice of Jesus. Yeats believed that the world was on the threshold of an apocalyptic revelation, as history reached the end of one age, but was greeted by the characters of the next. The poem shows the contrary forces at work in history and brings the conflict between the ancient and modern world to life. Prayer Before Birth, written at the height of the second world war also has a religious overtone to it, and the unborn foetus is used as a metaphor for Christ. In this poem, MacNeice emphasizes how harsh and ruthless the world is and how it has the ability to strip even and unborn baby of its innocence. ...read more.

When some commit anarchy, others are bound by the consequences of the anarchist's actions and are paradoxically not free to be anarchic themselves. Prayer Before Birth has shorter stanza's than The Second Coming, thus giving it a more worried, nervous pace and tone to it. The longer stanzas in The Second Coming gives the impression of surrender and the chaos that the poem refers to is not echoed by the structure. Other imagery used include seas full of blood and drowning. Those who are "the best" of this society are apathetic, and those who are "the worst" are in your face with "passionate intensity". Yeats is picturing in this poem a society turned upside-down and headed toward self-destruction and chaos. The lion with the head of the man is an interesting image in his poem, almost seeming to come straight out of the Book of Revelation in the Bible. The lion has the predatory power, strength and authority, and the head is that of a man, but a man with "a gaze blank and pitiless as the sun". ...read more.

This kind of language gives the poem a negative feel to it. Similarly, In The Second Coming, Yeats uses language such as 'fall apart,' 'anarchy,' 'blood-dimmed,' 'drowned,' 'pitiless,' 'nightmare' and 'beast.' This choice of language had the same effect as when used in Prayer Before Birth and makes the poem seem quite dark and adds tension to both of the poems. The use of light(or lack of light) is used in both poems to help with the imagery. In Prayer Before Birth, MacNeice says 'a white light in the back of my throat to guide me.' This use of light symbolises a glimmer of hope for the narrator and is used in a positive way. On the contrary, Yeats says in The Second Coming 'the darkness drops again' and he also refers to shadows. This is the opposite to how light is used in Prayer Before Birth, because here there is a lack of light. That shows the contrasts between the poems and that in Yeats' poem, there is less hope and optimism. ...read more.