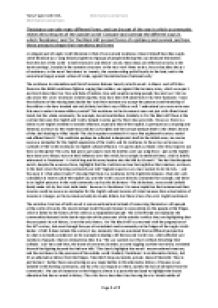 Compare and contrast the different ways in which Resistance and On The Black Hill present forms of resistance and survival, and how these pressures shape their narratives and forms

﻿Toby Taylor L6th MJL Click here to enter text. Click here to enter text. ?Resistance can take many different forms, and can be part of the way in which a community rejects the pressures of the outside world? Compare and contrast the different ways in which ?Resistance? and ?On The Black Hill? present forms of resistance and survival, and how these pressures shape their narratives and forms An integral part of Anglo-Welsh literature is that of survival and resistance. Sheers himself describes Anglo-welsh literature as a ?Long historical pattern of groups of people believing they can dislocate themselves from the rest of the world.? In both Chatwin?s and Sheers? novels, these ideas are reflected not only in the novels settings?, but also in the narrative structure. In the New York Times review, Roww describes the act of resistance, in the novel ?Resistance? as ?namely, the countervailing pull of loyalty to the land, and to the ancient and largely erased culture of Wales, against the abstraction of national unity.? The resistance to colonialism and that of invasion features heavily in both novels. In Sheers work of fiction there are the British resistance fighters waging their solitary war against the Germany army, which we expect. ...read more.

The critic Roww describes it as showing how to ?stand outside of recorded history reminds us how complicated and compromising an actual act of resistance might be?. The survival of isolationist rural communities also plays a significant part in both books. In both books people cut themselves off from the outside world in an attempt to both resist its influence and survive its onslaught. In ?Resistance? the German soldiers deliberately cut themselves off from the rest of the army, so that they do not have to return to the frontlines, disobeying orders- ?Albrecht did not order Steiner to transmit anything.? And ?If any man does want to re-join the regiment, that is of course his right and he would have my blessing. All I ask is that he do so at no risk to the other members of the patrol.? By staying, they like the tractor in ?On The Black Hill?, represent the intrusion of the modern world into an isolated community. They both must be harnessed to help life continue to survive in the absence of the men in ?Resistance? and with the arrival of old age and absence of hard working male heir -?Kevin, too, had begun to disappoint them? in ?On The Black Hill?, where the communities are cut ...read more.

Since then, Maesyfelin has become Benjamin?s second home-perhaps his only home.? However, the description of Rosie Fffield shows that some of the community are still resisting the encroachment of the modern world-?Her rooms have become very squalid, but when the District Health Officer suggest she move to an almshouse, she snapped ?You?ll have to drag me by the feet.? The ending of Resistance is far more tragic and elegiac. The Germans survival is ended-?looking for intelligence or any documents that might be used as evidence at the court martial.? However, Sarah continues to resist to the end, resisting the idea that Tom is dead. In her last acts of resistance to the Germans and the colonialism that they are a metaphor for, she leaves Albrecht and burns the Map-?The centuries old parchment took with the sound of autumn leaves burning on a bonfire.? She then continues to resist the idea that that Tom is dead, even if it means dying herself-?She knew she didn?t have much time, a couple of days perhaps, but she also knew this was no longer important. It was the looking that mattered.? Overall, both novels contain the fundamentally Anglo-Welsh features of survival and resistance. These are reflected in a number of ways in the two novels, for example the effects of the landscape, and the novels unconventional narrative structure. Page of ...read more.