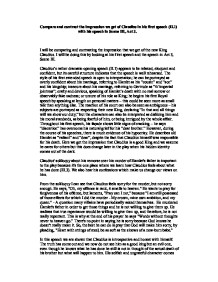 Compare and contrast the impression we get of Claudius in his first speech (II.1) with his speech in Scene III, Act 3.

Compare and contrast the impression we get of Claudius in his first speech (II.1) with his speech in Scene III, Act 3. I will be comparing and contrasting the impression that we get of the new King Claudius. I will be doing this by looking at his first speech and the speech in Act 3, Scene III. Claudius's rather dramatic opening speech (II.1) appears to be relaxed, eloquent and confident, but its careful structure indicates that the speech is well rehearsed. The style of his first extended speech is open to interpretation; he can be portrayed as overly confident about his marriage, referring to Hamlet as his "cousin" and "son" and his kingship; insecure about his marriage, referring to Gertrude as "th'imperial jointress"; crafty and devious, speaking of Hamlet's death with no real sorrow or observably ...read more.

He describes old Hamlet as "valiant" and "dear", despite the fact that Claudius himself was responsible for his death. Here we get the impression that Claudius is a good King and we assume he cares for others but this does change later in the play when his hidden identity comes out of the dark. Claudius' soliloquy about his remorse over his murder of Hamlet's father is important to the play because it's the one place where we learn how Claudius feels about what he has done (III.3). We also hear his confessions which make us change our views on him. From the soliloquy I can see that Claudius feels sorry for the murder, but not sorry enough. ...read more.

In this speech we are shown that Claudius is introspective and honest with himself. The truth has come out and we now do not see him as a good king but an evil one, even though he knows what he has done he still is not in thought of the actual death of his brother but what will happen to him. His selfish and ungrateful character comes out. By looking at these two speeches we see the true character of Claudius. His distinguishing features at the start are hypocrisy and subterfuge. He is clever in a worldly sense, a flattering strategist, good at manipulating his courtiers, at double-speak and we to can see from the first speech that he seems to be a master of persuasiveness. But from the start, his very words are like a drug. ...read more.