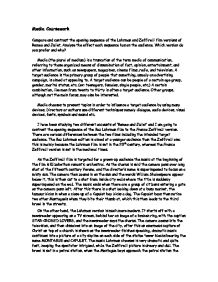 Compare and contrast the opening sequence of the Luhrman and Zeffirelli film versions of Romeo and Juliet. Analyse the effect each sequence has on the audience. Which version do you prefer and why?

Media Coursework Compare and contrast the opening sequence of the Luhrman and Zeffirelli film versions of Romeo and Juliet. Analyse the effect each sequence has on the audience. Which version do you prefer and why? Media (the plural of medium) is a truncation of the term media of communication, referring to those organized means of dissemination of fact, opinion, entertainment, and other information, such as newspapers, magazines, cinema films, radio, and television. A target audience is the primary group of people that something, usually an advertising campaign, is aimed at appealing to. A target audience can be people of a certain age group, gender, marital status, etc. (ex: teenagers, females, single people, etc.) A certain combination, like men from twenty to thirty is often a target audience. Other groups, although not the main focus, may also be interested. Media chooses to present topics in order to influence a target audience by using many devices. Directors or authors use different techniques namely dialogue, audio devices, visual devices, fonts, symbols and sound etc. I have been studying two different accounts of 'Romeo and Juliet' and I am going to contrast the opening sequence of the Baz Luhrman film to the Franco Zeffirelli version. There are various differences between the two films including the intended target audience. The Baz Luhrman edition is aimed at a younger audience than the Zeffirelli one; this is mainly because the Luhrman film is set in the 20th century, whereas the Franco Zeffirelli version is set in the medieval times. ...read more.

Baz Luhrmen uses various close ups which were helping build tension by showing both families feelings and facial expressions. Throughout the third brawl scene there are a number of close ups on the key characters that show the aggression. When there is a close up on Tybalt it expresses the hatred between the two families and definitely sets the scene for the clash. This can generally appeal to any audience because it has everything. The Zeffirelli film had a varied range of camera angles but mainly they are medium close ups, they used the medium close up during the tussle to show all the characters involved. I am going to contrast the humour, fighting, religion, dialogue, music and settings between the two films. There are many other differences between these two films, but I am going to focus on only these. The two films are set in completely different surroundings. The Baz Luhrman film is set in Miami whereas the Zeffirelli version is set in Umbria and Tuscany. Because they were very authentic cities, which were a lot like the setting of Shakespeare's Romeo and Juliet, would have been. The brawl in the Luhrman version is set in a petrol station, it seems hot the way the Montague's boys are dressed. The city seems like a dirty place and quite poor because the newsreader reports places that have been set on fire, people homeless and many fights breaking out. ...read more.