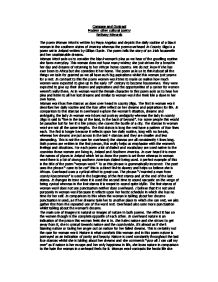 Compare and contrast - The poem Woman Work is written by Maya Angelou and depicts the daily routine of a black woman in the southern states of America whereas the poem overheard In County Sligo is a poem set in Ireland written by Gillian Clarke.

Compare and Contrast Modern other cultural poetry Bethany Edwards The poem Woman Work is written by Maya Angelou and depicts the daily routine of a black woman in the southern states of America whereas the poem overheard In County Sligo is a poem set in Ireland written by Gillian Clarke. The poem tells the story of an Irish housewife and her unattainable dreams. Woman Work asks us to consider the black woman's plea as we hear of the gruelling routine she faces everyday. This woman does not have many wishes; she just strives for a break in her day and dreams of returning to her African home country. We do not know if she has ever been to Africa but she considers it her home. The poem asks us to think about all the things we take for granted as we all have such big aspirations whilst this woman just yearns for a rest. In contrast to this the poem women work tries to make us realise how much women were expected to give up in the early 19th century to become housewives. They were expected to give up their dreams and aspirations and the opportunities of a career for women weren't really there. ...read more.

Overheard also uses more punctuation whilst talking about the woman's dreams. The main use of imagery is natural or images of nature in both poems. The effect it has on the women though is the complete opposite of each other. In overheard nature is an indication of the prison this woman feels she is in. She hates nature and she strives to get away from it, she is cynical towards nature and the countryside. It's almost as if she's blaming nature or taking her anger out on nature for her failed dreams. This is certainly not the case for woman work. Mature is what comforts this woman and in this poem nature is portrayed as an indication of purity and beauty. Nature is used constantly throughout the last four stanzas whilst she is talking about her dreams and she comments "your all I can call my own" as if nature is her escape and her only happiness in life, she loves nature in comparison to the hate the woman in overheard feels for it. Woman work contrasts the hectic life she leads and the calmness she strives for whereas overheard contrasts her dreams to her lifestyle. ...read more.

Although we know she is unhappy it is also brought to our attention that "the freedom is there for the taking" showing us without a doubt that this woman could actually leave and begin a new. If she is so unhappy in her life why is she not taking this chance for freedom? Of the two poems I preferred woman work by Maya Angelou I enjoyed it and the way it was written really helped me to empathise with the woman's feelings and situation. The use of nature as a comfort to the woman was an excellent technique and the poem made me take a lot of things into consideration. In contrast to this I didn't warm towards the character in overheard and I did not really enjoy the poem to a great extent. I did like the colloquial conversational way in which it was writtten, almost as if a fictional character was being created. I didn't really empathise greatly with the character though and I found her very difficult to understand, she was almost contradicting. Both poems portrayed the other cultures well and really put across a sense of oppression to women by men, I think overheard could have you some more language techniques to make it stronger but they were both good poems. ...read more.