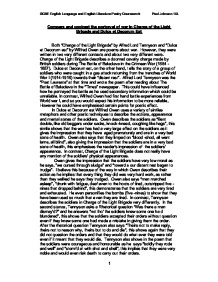 Compare and contrast the portrayal of war in Charge of the Light Brigade and Dulce et Decorum Est.

Compare and contrast the portrayal of war in Charge of the Light Brigade and Dulce et Decorum Est Both "Charge of the Light Brigade" by Alfred Lord Tennyson and "Dulce et Decorum est" by Wilfred Owen are poems about war. However, they were written in two very different contexts and about two very different wars. Charge of the Light Brigade describes a doomed cavalry charge made by British soldiers during The Battle of Balaclava in the Crimean War (1854-1857). Dulce et Decorum est, on the other hand, tells the story of a group of soldiers who were caught in a gas attack returning from the trenches of World War I (1914-1918) towards their "distant rest". Alfred Lord Tennyson was the "Poet Laureate" at that time and wrote the poem after reading about The Battle of Balaclava in the "Times" newspaper. This could have influenced how he portrayed the battle as he used secondary information which could be unreliable. In contrast, Wilfred Owen had first hand battle experiences from World war I, and so you would expect his information to be more reliable, However he could have emphasised certain points for poetic effect. In Dulce et Decorum est Wilfred Owen uses a variety of similes metaphors and other poetic techniques to describe the actions, appearance and mental states of the soldiers. ...read more.

Both poets give a very different insight into what war was like during the period in which the poems were written. In Dulce et Decorum est, Owen gives the impression that war was terrible as he uses a variety of emotive language that is very graphical and hyperbolic, mainly in the third stanza. Such as "watch his white eyes writhing in his face like a devils sick of sin", this ironic simile implies that the war was so terrible that even the devil didn't like it. This is ironic because a devil usually loves sins. All through the poem Owen, give the impression that war is horrifying as in the first stanza he gives the idea that the soldiers are in a very bad state of health. In the second stanza, Owen describes the gas attack and gives the reader a good idea of how nasty it is to watch someone die in a gas attack. In the third stanza, Owen uses very graphical and descriptive language to describe the death of a soldier; this shows the reader that the death of a soldier was not an honourable one like what is shown in the propaganda but that it is dreadful and terrible to watch. ...read more.

In the first stanza Owen uses a range of similes, metaphors and personification to show how badly the war has taken its toll on the soldiers' physical and mental states. In the rest of the poem Owen uses very graphical language to describe a soldiers death in a gas attack, this is to show the reader that he strongly disagrees with the view that in a war you get a glorious death but instead it is the exact opposite. Owens general message in the poem is that war is bad and should be avoided at all costs. In contrast, in Charge of the Light Brigade Tennyson gives the impression that the British soldiers were fighting a loosing battle. Tennyson gives the impression to the reader that he is not against the war even if they were going to loose but he still praises the soldiers for what they did. In Charge of the Light Brigade Tennyson contradicts Owens views, and instead says that it is honourable to die for ones country even if you loose the battle. In general I prefer Dulce et Decorum est because of what the poem stands for, Dulce et Decorum est give the views that war is a terrible thing and Owen is very against it whereas Tennyson seems to be a lot more pro war. GCSE English Language and English Literature Poetry Coursework Paul Johnson 10L 1 ...read more.