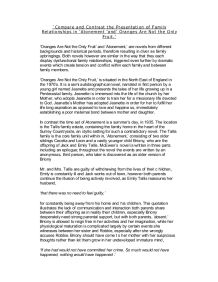 `Compare and Contrast the Presentation of Family Relationships in Atonement (TM)and(TM) Oranges Are Not the Only Fruit.(TM)

`Compare and Contrast the Presentation of Family Relationships in 'Atonement 'and' Oranges Are Not the Only Fruit.' 'Oranges Are Not the Only Fruit' and 'Atonement,' are novels from different backgrounds and historical periods, therefore resulting in diverse family upbringings. Both novels however are similar in the way that they each display dysfunctional family relationships, triggered even further by dramatic events which create tension and conflict within each family and between family members. 'Oranges Are Not the Only Fruit,' is situated in the North East of England in the 1970's. It is a semi autobiographical novel, narrated in first person by a young girl named Jeanette and presents the tales of her life growing up in a Pentecostal family. Jeanette is immersed into the life of the church by her Mother, who adopts Jeanette in order to train her for a missionary life devoted to God. Jeanette's Mother has adopted Jeanette in order for her to fulfill her life long aspiration as opposed to love and happiness, immediately establishing a poor maternal bond between mother and daughter. In contrast the time set of Atonement is a summer's day, in 1935. The location is the Tallis family estate, containing the family home in the heart of the Surrey Countryside, an idyllic setting for such a contradictory novel. The Tallis family is the core family unit within in, 'Atonement,' consisting of two older siblings Cecelia and Leon and a vastly younger child Briony, who are the offspring of Jack and Emily Tallis. ...read more.

This quotation also proves that Jeanette's Mother only sees the world through black and white terms, 'holy or unholy,' or 'right and wrong' and nothing in between is accepted. This attitude is also reflected through Briony's character as she finds it difficult to distinguish between right and wrong. Imagery is also signifigant to, 'Atonement,' the image of a triangle is prominent throughout the novel. When Robbie grabs the vase from Cecelia, two triangular pieces break off. One of the Twins has a triangular piece missing from his ear, which could represent their family triangle, of two parents and children or Lola and the twins been torn apart. Briony is also a part of another triangle. Together with Paul Marshall and Lola, as Briony has, 'Comprised with silence and falsehoods to send an innocent man to jail,' McEwen uses the relationships between Briony and Lola to extend the cracks in the Tallis family household further. Lola is also to blame for her family's downfall, as Lola fails to tell the truth about her r**e. The family circumstances in, 'Orange are not the only fruit.' allow the reader to also sympathies with Jeanette's character. Jeanette's Mother possesses firm religious beliefs and her rigorous enforcement of them on her daughter has an immense impact on Jeanette life, 'I have been brought in to join her in a tag match against the rest of the world.' This quotation proves that Jeanette has not been brought up like any other child, Jeanette's knowledge of the world has come from her Mother's obsessions and narrow minded views on religion, which have not helped Jeanette to fit into a society outside of the church. ...read more.

of the pair fooling around as children declaring that a, 'a giggling fit was always just a breathe away,' There astounding connection enlightens the novel and adds a comic image of two typical children messing around as youngsters. Leon's character is filtered through Cecelia's childhood admiration for him and is in awe of her older brother. Cecelia and Leon's sibling bond is the only firm, genuine and steady relationship within, 'Atonement.' McEwen may use Leon's character and his strong bond with Cecelia, as a way of making Briony feel jealous and left out as she is a lot younger that her siblings, therefore she cannot really relate to their mentality, leaving her feeling alone and isolated In conclusion, 'Atonement,' and 'Oranges Are Not the Only Fruit,' demonstrate a mixture of similarities and differences in the way that families are presented within both novels. The use of additional fiction is significantly prominent within each novel in order to portray and empahasise family relationships and relate to the main events happening outside these imaginary tales. Also the lack of maternal bond; in both novels depict the wellbeing of the effected characters, especially Jeanette and Briony, as well as Cecelia. Furthermore there is also a clear mother substitute present in the two novels. The novels are dissimilar due to the different ways the parents are identified as 'unfit' parents. Jeanette's mother's religion is an ongoing obstacle in their mother and daughter relationship, whereas Emily and Jacks 'absents,' due to illness and work adds to the deterioration of their family unit. McEwan and Winterson.................. ...read more.