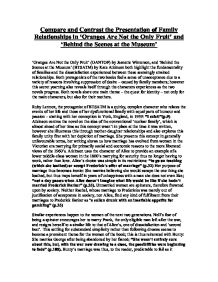 Compare and Contrast the Presentation of Family Relationships in 'Oranges Are Not the Only Fruit' and 'Behind the Scenes at the Museum' 'Oranges Are Not the Only Fruit' (OANTOF) by Jeanette Winterson, and 'Behind the Scenes at the Museum' (BTSATM) by Kate Atkinson both highlight the fundamentality of families and the dissatisfaction experienced between these seemingly strained relationships. Both protagonists of the two books feel a sense of unacceptance due to a variety of reasons involving suppression of desire - caused by family members; however this secret yearning also reveals itself through the characters experiences as the two novels progress. Both novels share one main theme - the quest for identity - not only for the main characters, but also for their mothers. Ruby Lennox, the protagonist of BTSATM is a quirky, complex character who relates the events of her life and those of her dysfunctional family with equal parts of humour and passion - starting with her conception in York, England, in 1959: "I exist!"(p.9) Atkinson centres the novel on the idea of the conventional 'nuclear family', which is almost ahead of her time as this concept wasn't in place at the time it was written, however she illustrates this through mother-daughter relationships and also explores this family unity first with her depiction of marriage. She presents this concept in generally unfavourable terms, her writing shows us how marriage has evolved from women in the Victorian era marrying for primarily social and economic reasons to the more liberated views of the 1960's. Atkinson uses the character of Alice to provide an example of a lower middle-class woman in the 1800's marrying for security thus no longer having to work, rather than love. ...read more.

This can be compared with Jeanette's and her mother's relationship. Although there are obvious difficulties in Jeanette and her mother's relationship, Jeanette learns much from her mother and her mother's role in the church. Jeanette is similar to her mother in the sense that she learnt to be an outspoken and strong person, important in dealing with and defending her sexuality. Although she has broken away from her mother's faith Jeanette has inherited her mother's strength of conviction on pursuing happiness and what she believes is right. Jeanette's mother is a powerful woman in her home and church and forcibly puts forward her views. She is selfish and ruthless and sulks if God does not concur with her will for destruction - making her an outside target for mockery. Jeanette is a p**n in her mother's "tag match against the rest of the world" (p.3) She does not let her maternal role hinder her career in the church. It is only with Jeanette's shock revelation of Lesbianism that her mother seems to change a little nearer the end of the novel: Her awareness that "oranges are not the only fruit" seems to suggest she has changed her one mindedness, especially as she becomes more like Elsie in the end and is able to express love and acceptance to Jeanette; However she will always be at war with the world and homosexuality with always be demonised and could never be accepted in the eyes of the lord "I love you almost as much as I love the Lord." We see the constraints in Jeanette and her mother's relationship when Miss Jewesbury has forced Jeanette's mother to get medical attention for Jeanette's deafness. ...read more.

This structural immediacy is seen in OANTOF also as the first page sets out the tone for the rest of the novel and includes humorous narrative in order to mock her mother and her innate combative nature. Jeanette's father, Jack, contrasts his wife strongly in that he is the 'Joseph' to her 'Virgin Mary'. He occasionally will rebel against his wife's authority, for example watching the wrestling on a Sunday - however he is still presented as a passive figure to her mother. Jeanette feels sympathy for her "poor dad" (p.11) and realises his dissatisfaction and inferiority to her mother, "he was never quite good enough" (p.11) and "did not push himself" (p.8). His absence from the majority of the novel illustrates the unimportance of him as a source of paternity. Both fathers' are rarely mentioned in both novels, representing the authors' feelings as fathers being the lacking role, the two books can almost be seen as feminist in this respect. In conclusion both texts have obvious similarities in relation to the representation of family relationships, as both Atkinson and Winterson use two mother's struggles with society to exaggerate their dysfunctionality within their family and both mother's also suffer from the yearning for another man, with Jeanette's mother wanting Pastor Spratt and Bunty wanting the life she was about to have before being deserted by her fianc�. However there are differences also in that Jeanette learns from her mother's authoritative confidence in qualities to help herself with her lesbianism whereas Ruby learns from her mother's mistakes, and vows to change her life unlike her mother did. ?? ?? ?? ?? ...read more.