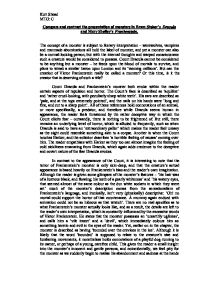 Compare and contrast the presentation of monsters in Bram Stokers Dracula and Mary Shelleys Frankenstein.

Compare and contrast the presentation of monsters in Bram Stoker's Dracula and Mary Shelley's Frankenstein. The concept of a monster is subject to literary interpretation - werewolves, vampires and manmade abominations all hold the label of monster, and yet a monster can also be a normal-looking person, but with the internal thoughts and warped consciousness such a creature would be considered to possess. Count Dracula cannot be considered to be anything but a monster - he feeds upon the blood of mortals to survive, and plans to wreak a similar havoc upon London and its 'teeming millions'. But can the creation of Victor Frankenstein really be called a monster? Or this time, is it the creator that is deserving of such a title? Count Dracula and Frankenstein's monster both evoke within the reader certain aspects of repulsion and horror. The Count's face is described as 'aquiline' and 'rather cruel-looking, with peculiarly sharp white teeth'. His ears are described as 'pale, and at the tops extremely pointed', and the nails on his hands were 'long and fine, and cut to a sharp point'. All of these references hold connotations of an animal, or more specifically, a predator, and therefore while Dracula seems human in appearance, the reader feels threatened by the rather deceptive way in which the Count elicits fear - outwardly, there is nothing to be frightened of. ...read more.

This can be compared to when Dracula grabs Harker's arm in a 'grip of steel', as both suggest a strong idea manmade creation, which only adds to the unnaturalness of both monsters. In both novels there are constant and reoccurring motifs that somehow link both of the monsters to concepts of the Christian religion. For instance, Count Dracula sleeps in the vicinity of an ancient, ruined chapel. In this and in many other ways, the Count represents a perversion of Christian belief - his diet of blood shockingly parallels the Christian Eucharist, in which believers drink and eat the blood and body of Jesus Christ. In many ways, Dracula perversely parallels Christ himself: like Christ, he has died and been reborn, but his resurrection is a blasphemy, and a manifestation of evil rather then a miracle. While Christ sheds his blood so that others might have eternal life, Dracula drinks the blood of others so that he himself might live eternally: 'on the lips were gouts of fresh blood, which trickled from the corners of the mouth and ran down over the chin and neck'. His immortality is a mockery of life; he is not truly immortal but 'undead', a term that Stoker himself used. ...read more.

In conclusion, there are both interesting similarities and stark differences between the presentation of Frankenstein's monster and Count Dracula - both are used to elicit feelings of fear and repulsion, one, through the method of quiet, brooding menace and coldly calculating evil, while the other uses loud and obvious imagery to challenge and frighten the reader by rendering a grotesque spectacle of physical difference. Both monsters are also used to represent and mock certain figures in the religion of Christianity, a theory that is both credible and possible, given the time and context in which both novels were written, perhaps to inspire and dissuade a God-fearing public from going against the tenets of Christianity. But perhaps the most interesting theme that links the novels together is the conflict between nature versus nurture - Dracula is a wholly evil creature; yes, an evil creature with a warped sense of 'justice', but an evil creature nonetheless. But can the same really be said for the creation of Victor Frankenstein, who is torn between vengefulness and compassion for his creator? The reader feels nothing but abject repulsion and horror towards Dracula, but for the creation of Dr. Frankenstein, we are more likely to feel pity - pity for what has been lost and what could have been, and perhaps even pity for what should never have been at all. Kurt Shead MTG: C ...read more.