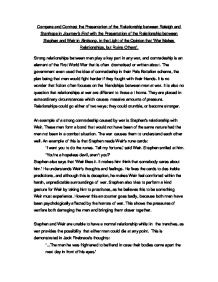 Compare and Contrast the Presentation of the Relationship between Raleigh and Stanhope in Journey's End with the Presentation of the Relationship between Stephen and Weir in Birdsong, in the Light of the Opinion that 'War Makes Relationships, but Ruins Others'. Strong relationships between men play a key part in any war, and comradeship is an element of the First World War that is often dramatised or written about. The government even used the idea of comradeship in their Pals Battalion scheme, the plan being that men would fight harder if they fought with their friends. It is no wonder that fiction often focuses on the friendships between men at war. It is also no question that relationships at war are different to those at home. They are placed in extraordinary circumstances which causes massive amounts of pressure. Relationships could go either of two ways; they could crumble, or become stronger. An example of a strong comradeship caused by war is Stephen's relationship with Weir. These men form a bond that would not have been of the same nature had the men not been in a combat situation. The war causes them to understand each other well. An example of this is that Stephen reads Weir's rune cards: 'I want you to do the runes. Tell my fortune,' said Weir. Stephen smiled at him. 'You're a hopeless devil, aren't you?' ...read more.

Bring the whisky!' showing how dependent he is upon alcohol. There is a link here to Birdsong; the first time we see Stephen and Weir together they are finishing a bottle of whisky: 'Jack looked towards Weir and noticed the almost empty bottle of whisky that stood on the table.' This shows the men's similar coping mechanisms. Despite his hardened exterior, we learn that Stanhope has a soft heart. This is particularly apparent in his conversations with Osborne, in which he calls him 'uncle'. However his hardened mask is presented to Raleigh, which creates tension between these characters. Stanhope has become a different person to the one Raleigh knew before the war. Osborne warns Raleigh of this: 'Osborne: You know, Raleigh, you mustn't expect to find him - quite the same.' The pause in his speech is heavily loaded with meaning. Osborne cannot tell Raleigh just how much Stanhope has been affected by the war. This also links to Raleigh's naivety about the realities of warfare. He also still calls Stanhope 'Dennis' which shows he cannot accept Stanhope as this new, nerve-wrecked officer. Stanhope is horrified that Raleigh has been sent to his company, shown by his reaction at seeing him for the first time: 'Raleigh stands smiling awkwardly...He stops short at the sight of Raleigh. There is silence. Raleigh: Hullo, Stanhope! Stanhope stares at Raleigh as though dazed.' ...read more.

An interesting comparison is that death breaks both of the relationships apart. Raleigh and Weir's deaths are extremely harrowing in their own ways. In Raleigh's death, the audience will feel hopeless sympathy after an insight into Stanhope's real emotions. His death is particularly poignant as he is a naive youth. One view that could be taken is that Raleigh's imminent death is the factor that changes Stanhope's attitude toward him, as it is only in his injured state that he becomes caring. However it is more likely to be the case that Stanhope resented Raleigh's being in his company so much because he cared for him. At Weir's death in Birdsong we feel pity and regret for Stephen, because his last words to Weir were that of frustrated anger. Ultimately, war has tested both of the relationships, but they are both destroyed by death - a hopeless reality in war. In conclusion, I believe that the conditions of the First World War were testing and pressurising, but it was ultimately the perfect time for comradeship to flourish. The underlying feelings in the relationships between Weir and Stephen and Stanhope and Raleigh are that of care. In the case of breaking or making relationships, perhaps it is easier for war to create a new friendship, rather than to keep up a relationship from home, as any reminder of home is too complex an emotion to deal with. This is certainly true in Stanhope's case. Ultimately, war can break a friendship through the harsh reality of death. ...read more.