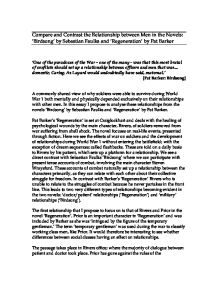 Compare and Contrast the Relationship between Men in the Novels: 'Birdsong' by Sebastian Faulks and 'Regeneration' by Pat Barker

Compare and Contrast the Relationship between Men in the Novels: 'Birdsong' by Sebastian Faulks and 'Regeneration' by Pat Barker 'One of the paradoxes of the War - one of the many - was that this most brutal of conflicts should set up a relationship between officers and men that was... domestic. Caring. As Layard would undoubtedly have said, maternal.' [Pat Barker: Birdsong] A commonly shared view of why soldiers were able to survive during World War 1 both mentally and physically depended exclusively on their relationships with other men. In this essay I propose to analyse these relationships from the novels 'Birdsong' by Sebastian Faulks and 'Regeneration' by Pat Barker. Pat Barker's 'Regeneration' is set at Craiglockhart and deals with the healing of psychological wounds by the main character, Rivers, of soldiers removed from war suffering from shell shock. The novel focuses on real-life events, presented through fiction. Here we see the effects of war on soldiers and the development of relationships during World War 1 without entering the battlefield; with the exception of dream sequences; called flashbacks. These are told on a daily basis to Rivers by his patient, which sets up a platform for a relationship. We see a direct contrast with Sebastian Faulks 'Birdsong' where we can participate with present tense accounts of combat, involving the main character Steven Wraysford. ...read more.

I believe that Prior is dependant on Rivers due to Prior wanting to know why he is having nightmares and why he cannot remember them, he subsequently becomes dependant on Rivers for reasons and answers to his problems. This dependence is however, one-way just like the relationship, as ultimately Rivers does not reveal much about himself to Prior. In contrast to Rivers antagonistic relationship with Prior in 'Regeneration', Steven Wraysford and Michael Weir share a reciprocal relationship in 'Birdsong'. Stephen Wraysford undergoes most of the combat as a nihilist, detached from any sense of reason. He admits to Captain Gray: "I don't value my life enough. I have no sense of the scale of these sacrifices. I don't know what anything is worth". Both officers and men consider him cold, isolated and a little odd. He however shares a very strong relationship with Weir, which unlike Prior and Rivers, is also involved on a personal level. The passage that I propose to analyse takes place during an air raid. In an attempt to calm himself down from the air raid Weir turns to Steven: 'Talk to me, Wraysford.' The regular repetition of 'talk to me' gives the image of one being in a desperate situation and consequently looking for someone (normally a friend) ...read more.

freedom with which Sassoon tells Rivers about his pacifist friends and homosexuality; topics that were illegal to discuss, demonstrates the trust between the characters. Both characters also share their doubts of the war. Rivers appears as a 'father-figure' to Sassoon: 'he'd [Sassoon] joked once or twice to Rivers about him being his father confessor...but only now...did he realize how completely Rivers had come to take his father's place' It is intriguing to see Rivers developing a reciprocal relationship with Sassoon yet an antagonistic relationship with Prior. Throughout the novel he refers to Billy Prior as 'Mr. Prior' and Siegfried Sassoon as 'Siegfried', this informal reference to the latter could be a possible explanation that the social class of an individual depends on whether a reciprocal relationship would be formed. This could be the case with Rivers. The fact that Rivers and Sassoon are well educated demonstrates their higher class in society. Prior on the other hand has been extremely successful, but from a lower class. This is evident through Rivers noticing his accent: 'northern accent... vowel sounds distinctively flattened' and we also get a clearer insight into Priors background when Rivers meets his parents. Here we learn that his father believes that Prior has deserted his class by joining the army: 'I told him, time enough to do summat for the Empire when the Empire's done summat for you. ...read more.