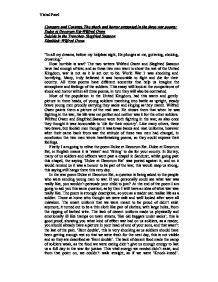 Compare and Contrast, The shock and horror presented in the three war poems: Dulce et Decorum Est-Wilfred Owen Suicide in the Trenches- Siegfried Sassoon Disabled- Wilfred Owen "In all my dreams, before my helpless sight, He plunges at me, guttering, choking, drowning." How horrible is war? The two writers Wilfred Owen and Siegfried Sassoon have had enough of war, and so these two men want to show the rest of the Untied Kingdom, war is not as it is set out to be. World War 1 was shocking and horrifying. Many, truly believed it was honourable to fight and die for their country. All three poems have different sceneries that help us imagine the atmosphere and feelings of the soldiers. This essay will look at the comparisons of shock and horror within all three poems, in turn they will also be contrasted. Most of the population in the United Kingdom, had this warm and gently picture in there heads, of young soldiers marching into battle as upright, steady brave young men proudly carrying they sacks and singing as they march. Wilfred Owen paints them a picture of the real war. He shows them that when he was fighting in the war, his life was not perfect and neither was it for the other soldiers. Wilfred Owen and Siegfried Sassoon were both fighting in the war, as also once they thought it was honourable to 'die for their country'. Like many others, these two brave, but foolish men thought it was brass bands and neat uniforms, however after their came back from war the attitude of these two men had changed, in conclusion the two men wrote heartbreaking poems, so they could express their feelings. Firstly I am going to relive the poem Dulce et Decorum Est. Dulce et Decorum Est, in English means it is 'sweet' and 'fitting' to die for your county. ...read more.

There you are at home thinking it is good to fight in the war, there is only one name for you people, ignorant. I know war is sick, I was there, don't forget these words, war is shocking and horrify. A soldier's death would most likely to be a horribly gruesome death. It is evil to commit the lie that it is 'noble to die for one's country', the Great War has brought countless suffering to so many young men. Now looking at 'Disabled', by Wilfred Owen. In this poem, I, Wilfred Owen am trying to express the real tragedy of war, just like I have done in the poem Dulce et Decorun Est. However this time I am focusing on one young man, a single victim of war. I am going to explain to you, you horrible murders, the effect the war has had on the young man's life, as when the brave boy returns he is legless as the poem states, 'he sat in a wheeled chair'. Here I am going to talk about is the description of the disabled man, in his own view, showing his terrible life. I realise it is bad to die in the war, however it is also horrible for the people that were not killed in the war, as we suffer a lot more, this is also shown in the poem Dulce et Decorum Est, as us soldiers also suffer when we were resting in there dug out, and suddenly we had realised that we were being gassed,' Gas! Gas! Quick, boys'. I am so ashamed of my appearance that I cannot wait for night as like me, dark also hides. This can be compared with the poem Dulce et Decorum Est as also us soldiers were ashamed of the uniforms we were wearing, as they had been covered in wet mud and ripped by barbed wire, 'like old beggars under sacks'. ...read more.

All three poems have gone to the limit in showing the feeling of shock and horror that was presented in 1914-1918. In the poems "Disabled" and "Suicide in the Trenches" both young men weren't even frighten, however one day they were afraid. 'Of fear yet came'. In all three poems, we are given a description of youth at war. All the poems show the detail of the slow and painful deaths of the soldiers. Wilfred Owen and Siegfried Sassoon do focus on individual acts and events, but at the same time the two writers use the readers imagination to assist their message. When these men were meant to be heroes, there turned out to be sufferers. Overall in Dulce et Decorum est it is evident that this poem is an descriptive poem, this is a similarity in Disabled. On the other hand looking at Suicide in the trenches it seems in this poem its prevails more of a poetic type to describe the war poems. Overall all three poems describe the feelings of people in the war and their experiences in regards to their feelings. Although in Dulce et Decorum est it seems to include several soldiers as apposed to one individual. It is as if the poem is being told as a story, Wilfred Owen is going into great detail about how the soldiers are reacting when they lose they boots, the soldiers feet have been cut by sharp rocks, however the attitude of the soldiers are heroic, that they still march on, "Men marched asleep, many had lost their boots but limped on, blood shot". It is not very poetic as it goes not rhyme, but describes in great detail the state the soldiers are in. All three poems are talking about young men, fighting in the war. I personally enjoyed writing this poem, as it made me realise the true meaning of life. And most importantly all have a message to the reader. This war is now over. Vishal Patel ...read more.