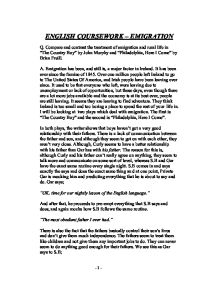 Compare and contrast the treatment of emigration and rural life in &amp;#147;The Country Boy&amp;#148; by John Murphy and &amp;#147;Philadelphia, Here I Come&amp;#148; by Brian Freill.

ENGLISH COURSEWORK - EMIGRATION Q. Compare and contrast the treatment of emigration and rural life in "The Country Boy" by John Murphy and "Philadelphia, Here I Come" by Brian Freill. A. Emigration has been, and still is, a major factor in Ireland. It has been ever since the famine of 1845. Over one million people left Ireland to go to The United States Of America, and Irish people have been leaving ever since. It used to be that everyone who left, were leaving due to unemployment or lack of opportunities, but these days, even though there are a lot more jobs available and the economy is at its best ever, people are still leaving. It seems they are leaving to find adventure. They think Ireland is too small and too boring a place to spend the rest of your life in. I will be looking at two plays which deal with emigration. The first is "The Country Boy" and the second is "Philadelphia, Here I Come". In both plays, the writer shows that boys haven't got a very good relationship with their fathers. There is a lack of communication between the father and son, and although they seem to get on with each other, they aren't very close. Although, Curly seems to have a better relationship with his father than Gar has with his father. ...read more.

Curly Says; "Even though I'll be on that plane tomorrow, I'll have my doubts." Both father and son do love each other but are unable to show it. Gar wants to talk to his father badly, but is unable to express himself. "Keep at it, the silence is the enemy." The fathers also seem to want their sons to stay, but again, they either are unable or too stubborn to say it. We see this as Eddie says; "They're too proud to get down on their knees and ask you to stay." Madge says (referring to S.B); "Just because he doesn't say much doesn't mean he hasn't got feelings like the rest of us." There are a number of reasons why both boys want to go to America. For Gar, it is the fact that Ballybeg is a small town with not much going for him. It has a snobbish, small-minded attitude and it is boring. Nothing exciting ever happens. He can't fulfil, what he believes, to be his full potential. Another reason would be his failed relationship with Katy Doogan. He was going to marry her, but hadn't got the backbone to stand up to Katie's father. She is now married to Dr. Francis King in Ballybeg. I think, he thinks, he wouldn't be able to handle seeing his one true love all the time, with another man. ...read more.

Although, ultimately, Gar doesn't really wasn't to go, he feels he has no real choice. "Good boy! Why do you have to leave? Why?" "I don't know." Curly on the other hand, stays and seems to gain his independence, with his father handing over the farm to him. This and the fact he is in love with Eilleen and is going to marry her, is the reason he stays. He had a lot to stay for, whereas Gar, who desperately wanted to stay, has to leave. "But its no good shouting anymore, you've got to hand over sometime." I enjoyed both plays and enjoyed reading them but I think that "Philadelphia, Here I Come" shows a more accurate portrayal than "The Country Boy" because I think it shows a more realistic side of what it would be like for a young boy emigrating. Mostly they would've went and the way Gar has nothing to stay for is more real life, whereas "The Country Boy" shows more of a "...and they lived happily ever after" fairytale style ending, where Curly stays, marries his true love, gets the farm and gains his independence. It all just seems to good to be true. So, in conclusion, I think both plays were very good, but I think "Philadelphia, Here I Come" is a more accurate portrayal Sean Mc Quade 11B ?? ?? ?? ?? - 1 - ...read more.