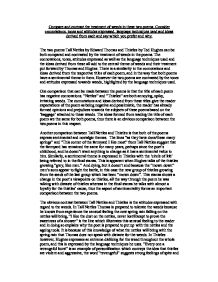 Compare and contrast the treatment of weeds in these two poems. Consider connotations, tones and attitudes expressed, language techniques used and ideas derived from each and say which you prefer and why.

Compare and contrast the treatment of weeds in these two poems. Consider connotations, tones and attitudes expressed, language techniques used and ideas derived from each and say which you prefer and why. The two poems Tall Nettles by Edward Thomas and Thistles by Ted Hughes can be both compared and contrasted by the treatment of weeds in the poems. The connotations, tones, attitudes expressed as well as the language techniques used and the ideas derived from these all add to the central theme of weeds and their treatment put forward by Thomas and Hughes. There is a similarity in the connotations and ideas derived from the respective titles of each poem, and in the way that both poems have a sentimental theme in them. However the two poems are contrasted by the tones and attitudes expressed towards weeds, highlighted by the language techniques used. ...read more.

Similarly, a sentimental theme is expressed in Thistles with the 'circle of life' being referred to in the final stanza. This is apparent when Hughes talks of the thistles growing "grey, like men." And dying, but it doesn't end because the "mown down" men's sons appear to fight the battle, in this case the new group of thistles growing from the seeds of the last group which has been "mown down". This stanza shows a change in the poet's viewpoints on thistles, all the way through the poem he was talking with distaste of thistles whereas in the final stanza he talks with almost a loyalty for the thistles' cause, thus the aspect of sentimentality forms an important comparison between the two poems. The obvious contrast between Tall Nettles and Thistles is the attitudes expressed with regard to the weeds. In Tall Nettles Thomas is prepared to tolerate the weeds because he knows from experience the sensual feeling the new spring rain ...read more.