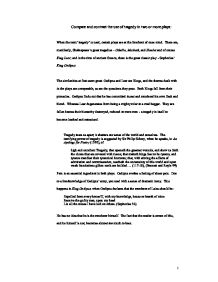 Compare and contrast the use of tragedy in two or more plays:

Compare and contrast the use of tragedy in two or more plays: When the term 'tragedy' is used, certain plays are at the forefront of ones mind. There are, manifestly, Shakespeare's great tragedies - Othello, Macbeth, and Hamlet and of course King Lear; and in the time of ancient Greece, there is the great classic play - Sophocles' King Oedipus. The similarities at first seem great. Oedipus and Lear are Kings, and the themes dealt with in the plays are comparable, as are the questions they pose. Both Kings fall from their pinnacles. Oedipus finds out that he has committed incest and murdered his own flesh and blood. Whereas Lear degenerates from being a mighty ruler to a mad beggar. They are fallen heroes their hierarchy destroyed, reduced to mere men - a tragedy in itself to become loathed and ostracised. Tragedy tears us apart; it shatters our sense of the world and ourselves. The terrifying power of tragedy is suggested by Sir Philip Sidney, when he speaks, in An Apology for Poetry (1595), of high and excellent Tragedy, that openeth the greatest wounds, and show us forth the ulcers that are covered with tissue; that maketh kings fear to be tyrants, and tyrants manifest their tyrannical humours; that, with stirring the affects of admiration and commiseration, teacheth the uncertainty of this world and upon weak foundations gilden roofs are builded.... ...read more.

Their misjudgements come from their own character flaws, whereas Oedipus' misjudgements are fated due to his own lack of information. Gloucester wrongs Edgar by believing Edmond. Gloucester is given several chances to see through Edmond's charade, but is tricked by his b*****d son into believing that Edgar is plotting his death. Gloucester knows both sons well enough; he has no reason to assume Edgar as the guilty party, other than Edmond's testimony. If he were thinking clearly he would be aware of this; however, because of his preference for his b*****d son it does not occur to him to assume Edmond is lying. He does not wish to believe either son as evil. He is though, easily convinced. Again it is his character that causes this gross misjudgement not the lack of information. In virtually the same way Lear esteems Goneril and Regan's declarations of devotion over Cordelia's blunter statement of duty, even though Cordelia is as sincere as they are false. As their father he must surely be aware of their characters and be able to judge them fairly. Lear Asks: Which of you shall we say doth love us most, That we are largest bounty may extend Where nature doth with merit challenge? (Shakespeare, 5) He seems as though he is deliberately wronging Cordelia, in spite of his obvious affection for her. ...read more.

We cannot pin down the blame as we can in Lear and questions are left to hang without resolution. The same questions are asked in Lear as in Oedipus but appear less obvious than the former. In Lear the intense plot distracts us whereas we are confronted with them in Oedipus 'head on', because the action has already occurred. Therefore Lear seems to come to a more acceptable resolution. At the end of King Oedipus, Sophocles leaves one with the burden of unresolved issues. Whereas Shakespeare, though not coming to a resolution makes them more acceptable and less sad. Lear seems more cathartic than Oedipus and there seems to be less agony about its 'tragic nature'. At the time Oedipus was conceived, scholars and the masses that attended performances truly believed in the concept of the gods, fate and the inevitability of predestiny. It was the birth of classical concepts and the humanities. Shakespeare's Lear is written in a different era and borrows many ideas from Grecian concepts but pays homage to more modern concepts of the Elizabethan/Jacobean sensibilities. There are more romantic notions in Shakespeare whereas in Sophocles there is a more allegorical moral, although both provide didactic functions. The major theme of tragedy involves a mighty and respected figurehead dragged down from a great height by circumstance or fate to the human condition of pathos and suffering and is consequently reduced to everyman. Tragedy is the tool that awakens the audience's senses so we pity and empathise with the flawed hero. ...read more.