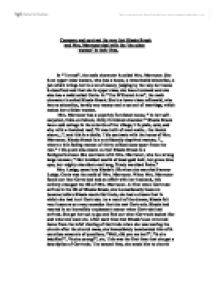 Compare and contrast the way that Rhoda Brook and Mrs. Marroner deal with the &amp;#145;the other woman&amp;#146; in their lives.

Compare and contrast the way that Rhoda Brook and Mrs. Marroner deal with the 'the other woman' in their lives. In "Turned", the main character is called Mrs. Marroner. She is an upper class women, who has a house, a remarkable education, a job which brings her in a lot of money judging by the way her house is described and that she is upper class, she has a husband and she also has a maid called Gerta. In "The Withered Arm", the main character is called Rhoda Brook. She is a lower class milkmaid, who has no education, hardly any money and a son out of marriage, which makes her a fallen woman. Mrs. Marroner has a superbly furnished house, " In her soft-carpeted, thick-curtained, richly furnished chamber." Rhoda Brook has a cold cottage in the suburbs of the village, it is plain, cold, and airy with a thatched roof, "It was built of mud-walls... the thatch above....", and this is a simile. This contrasts with the house of Mrs. Marroner. Rhoda Brook is a nutritionally deprived woman, "... where a thin fading woman of thirty milked some apart from the rest." This quote also shows us that Rhoda Brook is a foreigner/outcast. ...read more.

Rhoda copes differently because, first of all she is jealous of Gertrude because she has married Rhoda's old lover, and is upper class, ladylike etc. The community plays a very big part in not helping Rhoda to cope; they are all spreading rumours about e.g. that she is a witch. By Rhoda hearing these, she begins to believe them and it damages her self-confidence and self esteem. This all begins with the first mention of Gertrude being brought home to live with Farmer Lodge, "he do bring home his bride to-morrow, I hear. They've come as far as Anglebury to-day." Rhoda is financially dependent on Farmer Lodge, which leaves Rhoda emotionally insecure. This means that if Farmer Lodge makes Rhoda redundant, she will have no other job, because she has had little or no education. Also she is lower class that makes finding another job much more difficult, she will have nowhere to live. This contrasts with Mrs. Marroner, who unlike Rhoda has her own house, she is financially independent, and is able to buy her own house when she leaves her husband. Rhoda has no education so this means that she cannot think rationally about things, and is unable to cope with the situation at hand by thinking about it (she forgets who she is). ...read more.

Also that if it was your husband's fault, then you shouldn't be at war with the other woman. To conclude, Mrs. Marroner is an overall stronger woman than Rhoda, and is able to manage much more easily with the situation because she has an education, a job, money, and her own house. All these factors help Mrs. Marroner to cope, whilst Rhoda cannot deal with the situation so she leaves the town, where she used to live. Mrs. Marroner makes a totally new life for her self and lives with the other woman. Rhoda's experiences are the complete opposite, and no matter where she goes, her problems will follow her and it will all begin again. As Rhoda having so many problems with no education, jealousy, being an outsider, she is unable to cope with 'the other woman' Gertrude, whether as Mrs. Marroner is able to cope with 'the other woman' Gerta. Mrs. Marroner at the end puts her husband in the spotlight and challenges him what he wants, "What have you to say to us?" Rhoda returns to her old town and everybody remembers who she is and what has happened, "Here, sometimes those who knew her experiences would stand and observe her, and wonder what sombre thoughts were beating inside that impassive, wrinkled brow, to the rhythm of the alternating milk-streams." ?? ?? ?? ?? ...read more.