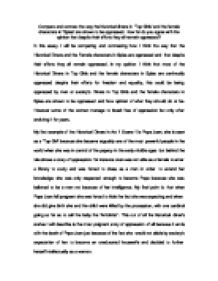 Compare and contrast the way the historical diners in Top Girls and the female characters in Spies are shown to be oppressed. How far do you agree with the opinion that despite their efforts they all remain oppressed?

Even after her second baby had been taken away she remains loyal to her husband proving that she would do anything for him. Nevertheless the marquis still feels he has to prove that she will obey him no matter what another time, he leaves her and sends her back to her father under the pretence that he will be marrying a younger wife. It is here that the story changes and it is revealed that the girl the marquis is preparing to marry is none other than her daughter; they are then reunited as the marquis finally believes that his wife loves him enough to do whatever he commands. I believe that even though Griselda was willing to obey her husband, his treatment of her, forcing her to give away her children and obey him amounts to nothing more than slavery and shows that just because she was his wife he thought he could order her do anything just because he didn't feel she loved him. Her story could be compared to Mrs Hayward's towards the end of Spies; this is because towards the end of Spies when Mr Hayward finds out what his wife has been doing he begins to force her to accompany him everywhere just so he can regain control over her. ...read more.

This is later on revealed to be a facade as she is not liked by the people she works for as she is described as having more masculine traits, this is shown during the dinner when she orders steak, a particularly masculine food. At the end of the novel it is also revealed that Marlene's freedom is not as it seems as in return for the career, travelling, and freedom to chose a man she had to sacrifice her own child in order to obtain her present status. This shows that despite outward appearances Marlene is still oppressed as she is forced apart from her daughter to obtain what she wants from life. In conclusion I believe that despite their efforts the Historical Diners and the female characters in Spies are continually oppressed in some form, be it a man or society's opinion of what they should be. However it can be argued that through all the oppression and sacrifice some but not all of the females are able to better themselves further than they would have without the oppression, for instance Griselda would not have been able to stay the marquis wife and live in luxury compared to her peasant upbringing if she had not endured her husbands oppression. Words: 1,245 ?? ?? ?? ?? ...read more.