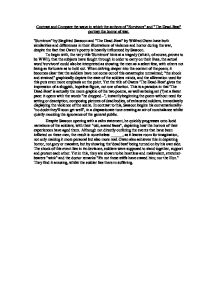 Compare and contrast the ways in which the authors of

Contrast and Compare the ways in which the authors of "Survivors" and "The Dead-Beat" portray the horror of war. "Survivors" by Siegfried Sassoon and "The Dead-Beat" by Wilfred Owen have both similarities and differences in their illustrations of violence and horror during the war, despite the fact that Owen's poetry is heavily influenced by Sassoon. To begin with, the very title 'Survivors' hints at a tragedy (which, of course, proves to be WW1), that the subjects have fought through in order to carry on their lives, the actual word 'survivors' could also be interpreted as showing the men as a select few, with others not being so fortunate as to hold out. ...read more.

Yet the title of Owens 'The Dead-Beat' gives the impression of a sluggish, hopeless figure, not one of action. This is a paradox in that 'The Dead-Beat' is actually the more graphic of the two poems, as well as being set (?) at a faster pace: it opens with the words "he dropped--", instantly beginning the poem without need for setting or description, composing pictures of dead bodies, of exhausted soldiers, immediately displaying the violence of the scene. ...read more.

Although not directly outlining the events that have been inflicted on these men, the result is nonetheless ______, as it leaves room for imagination, not only making it more personal but also more real. Owen also achieves this in depicting horror, not gory or macabre, but by showing the 'dead beat' being turned on by his own side. The shock of this event lies in its deviance, soldiers were supposed to stand together, support and protect each other. Yet in this, they are shown to be heartless and malevolent, stretcher-bearers "wink" and the doctor remarks "It's not these stiffs have crazed him; nor the Hun." They find it amusing, whilst the soldier lies there in suffering. ...read more.