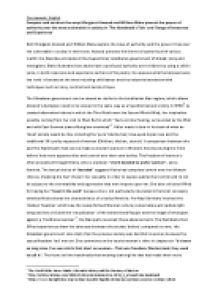 Transfer-Encoding: chunked ﻿Coursework- English Compare and contrast the ways Margaret Atwood and William Blake present the power of authority over the most vulnerable in society in ?The Handmaid?s Tale? and ?Songs of Innocence and Experience? Both Margaret Atwood and William Blake explore the issue of authority and the power it has over the vulnerable in society in their texts. Atwood presents the theme of authority with various motifs: the n**i-like principles of the hypocritical, totalitarian government of Gilead; irony and neologisms. Blake illustrates how adults have a profound authority over children by using a child?s voice, in both innocence and experience sections of his poetry. He exposes what he believed were the ?evils? of society at the time including child labour and the industrial revolution with techniques such as irony, contrast and social critique. The Gileadean government can be viewed as similar to the totalitarian n**i regime, which allows Atwood?s dystopian novel to be viewed in the same way as a hypothetical axis victory in WWII[1] (a created alternative history in which the Third Reich won the Second World War), her inspiration possibly coming from her visit to West Berlin which ?had a sinister feeling, surrounded by the Wall and with East German planes flying low overhead?[2]. Hitler made it clear in his book of what an ?ideal? society would be like, including the ?pure? blonde hair, blue-eyed Aryan race and the traditional 3K?s policy expected of women (Children, kitchen, church). A comparison between this and The Handmaid?s Tale can be made as modern women in Western America during the ?time before? had more opportunities and control over their own bodies. ...read more.

In Blake’s poetry, it is clear that he had a deep concern for the children of the 18th century, who were often used for child labour as young boys were often used as chimney sweeps where they were forced into tiny spaces and many suffered from ailments based on their ‘job’[7]. In the ‘Chimney Sweeper’ from Songs of Innocence, Blake uses the naïve narrative of a child and the syndetic listing of regular boys’ names “d**k, Joe, Ned, & Jack”-emphasising the normality of the boys; meaning this kind of exploitation could have happened to anyone. He creates an innocent tone with a dark underlining message; “if all do their duty, they need not fear harm.” This ambiguity and innocence allows the reader to sympathise with the child who believes that if they do the duty of chimney sweeping, God will protect them and they will go to heaven. On one hand this can be seen as hopeful because the angelic semantic field (“angel” “bright” “white”) suggests a ‘guardian’ as a form of protection; the juxtaposition the “black” soot and the “white” imagery could represent religion being able to give hope and encourage the children in dark times. The narrator comments on this thought making his friend “happy and warm”. However, it is also possible that Blake is criticising religion because of the false hope it gives the chimney sweeps with the quote “if all do their duty, they need not fear harm”, this suggests the owners of the young and naive sweeps indoctrinate them by manipulating them to do their jobs and if they don’t they will be doing something which is ‘morally wrong. ...read more.

This is parallel to the restriction the narrator experiences in ‘The School Boy’, who dreams of being free within nature and free of the prisons of school, where there is mass control. The juxtaposition of colours between the children, who are described wearing “red & blue & green”, manifests the imagery of grey, dull supervisors alongside the colourful children dressed in prominent primary colours. To conclude, both texts express sympathy to the vulnerable in society and serve as an overall message to the readers. Whilst Atwood’s novel can be perceived as a ‘warning’ to women to remember the roots of feminism as Offred had only just realised the importance of Women’s righrs and a criticism of traditional old-fashioned patriarchy, Blake’s poetry creatively highlights the corruption of child labour, expresses the importance of nature and the unity of the human race. Both Atwood and Blake present the young as more vulnerable; The Handmaids are young in order to reproduce and the children are controlled in Blake’s poem in a new age of industry and labour. This suggests that the authorial intent may have been to present the youth as being naïve and easily manipulated by the older generation (shown by the Chimney sweep and Offred’s indoctrination) but can also be the root of change and evolution (presented by the thought process of the school boy and Moira’s character). ________________ [1] The World Hitler Never Made: Alternate History and the Memory of Nazism [2] http://articles.latimes.com/1990-03-04/entertainment/ca-2834_1_atwood-tale-handmaid [3] https://www.facinghistory.org/weimar-republic-fragility-democracy/primary-sources/weimar-culture [4] http://www.bl.uk/learning/histcitizen/21cc/utopia/methods1/bourgeoisie1/bourgeoisie.html [5] http://crossref-it.info/articles/24/Garden-of-Eden,-Adam-and-Eve,-'Second-Adam' [6] http://www.brainyquote.com/quotes/quotes/j/joycemeyer565203.html [7] http://www.wellerschimneysweeps.com/?page_id=384 [8] http://voicesofdemocracy.umd.edu/reagan-evil-empire-speech-text/ [9] Reflections upon the Education of Children in Charity Schools- Sarah Trimmer ...read more.