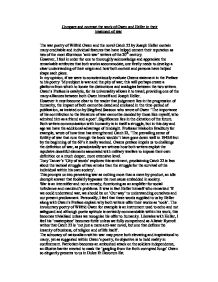 Compare and contrast the work of Owen and Heller in their treatment of war.

Compare and contrast the work of Owen and Heller in their treatment of war The war poetry of Wilfrid Owen and the novel Catch 22 by Joseph Heller contain many creditable and individual features that have helped cement their reputation as two of the most illustrious 'anti-war' writers of the 20th century. However, I feel in order for one to thoroughly acknowledge and appreciate the remarkable attributes that both works accommodate, one firstly needs to develop a clear understanding of their origin and how both context and persona have helped shape each piece. In my opinion, if we were to conscientiously evaluate Owens statement in the Preface to his poetry 'My subject is war and the pity of war; this will perhaps create a platform from which to locate the distinctions and analogies between the two writers. Owen's Preface is catalytic, for its universality allows it to travel, providing one of the many alliances between both Owen himself and Joseph Heller. However it must become clear to the reader that judgement lies in the progression of humanity, the impact of both cannot be dated and enclosed in the time-period of publication, as insisted on by Siegfired Sassoon who wrote of Owen 'The importance of his contribution to the literature of war cannot be decided by those like myself, who admired him as a friend and a poet'. Significance lies in the dictation of the future. Both writers communication with humanity is in itself a struggle, but in this day and age we have the additional advantage of hindsight. Professor Malcolm Bradbury for example, wrote of how time has strengthened Catch 22, 'The prevailing sense of futility of war that runs through the book wouldn't have gone down well in 1945/6 but by the beginning of the 60's it really worked. Owens preface impels us to challenge the definition of war, as paradoxically we witness how both writers exploit the repulsive deceitful elements associated with military warfare to impose their own definition on a much deeper, more extensive level. ...read more.

Its as simple as that'. This provides a paradox, for one cannot argue against the soldier's purpose and allegiance, yet the fallacy of the simplicity blurs the choice or the 'reality' that Korn offers. In my opinion, if one where to use the tantalizing torture of the Titanic's measured yet unavoidable demise under the depths of the Atlantic in 1912, this would provide a fitting metaphor for Heller's treatment of religion in Catch 22. The actuality of war embodies the subtle and underestimated iceberg, testing the potency of religion, instilling the soldiers with a frightened yet confined recognition. 'For the love of God seems dying' In Wilfrid Owen's Exposure for example. Still using this analogy, we witness how religion almost subconsciously ' forfeits' itself to the corrupt authority. Heller permits these people with the power to manipulate life and death. Lieutenant Scheiskopf's wife for example, advises Yossarian 'You'd better not talk that way about him, honey. He might punish you' which perfectly compliments Colonel Cathcart's earlier words 'Maybe sixty missions were too many for the men to fly..he ought to increase the number at once to seventy, eighty..' However, this metamorphosis becomes quite sophisticated. Rather subtlety, Heller obscures his answer through concealing it in the chaplain. Religion enters the novel 'Flound'ring' like that 'man in fire or lime' that Owen introduces in D.E.D.E.. Although to Heller, parading religion's inefficiency at war so distinctly would be too simple. Heller uses the journey of the chaplain from original morality to inversion 'Tell him to pray to God, Chaplain' to confirmation of his position as an interloper at war 'What disgrace? I'm more in disgrace now', 'I've never told a lie before, isn't it great?' This impeccably explains why such characters like Yossarian and Dunbar who, we as readers may consider sane, argue that 'there is no God'. It is once again another binary opposite, Heller throws at us. ...read more.

The skies in Catch 22 are used as a backdrop for death and disappearance. The density of the 'clouds' for example help ease the soldier's transition into obscurity. 'During the night, the cloud blew away and in the morning there was no more Clevinger'. The plane becomes a place of solitude 'There was only one place to go in an aeroplane and that was another part of the aeroplane'. In such a confined space therefore, survival boils down to individual mentality. The external world are left debilitated 'Waving his arms and shouting up at him, Mc Watt come down, but no-one could hear, certainly not Mc Watt'. The same feeling of helplessness is articulated in D.E.D.E 'Before my helpless sight, he plunges at me, guttering, choking, drowning'. The intimacy between both Owen and his victim makes his inability to help much more tormenting and cruel. The facetious nature of Catch 22 rather fittingly exemplifies Heller's resentment and rebellion towards conventional attitudes to war. In my opinion, to use General Peckem's words 'It never escaped his memory that neither black nor white was a colour' would to some extent help explain his motives for using humour in this novel. Heller uses humour as an attack against the established panorama of war. Peckems words evoke a subtle question, why should we observe the world in black and white and decide where things are and are not appropriate? Humour rebels against our subconscious extraction of its presence, fighting against the norm. Of course, If Owen where to adopt a similar humorous approach to his work, this would perhaps vanquish his objective to resist any poetic skill or effort. In the same way, Heller uses a character like Milo to 'paint' over the American ethos, Owen uses this technique to demonstrate how war has encroached the beauty of laughter. 'Treading blood from lungs that had loved laughter'. Owen gives blood a kind of discomforting persona. It becomes the enemy that has taken over territory, pre-occupying the lungs. ...read more.