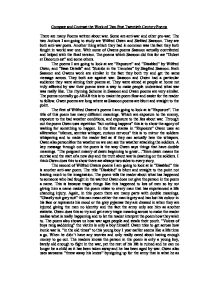 Compare and Contrast the Work of Two Post Twentieth Century Poems There are many Poems written about war. Some are anti-war and other pro-war. The two Authors I am going to study are Wilfred Owen and Siefried Sassoon. They are both anti-war poets. Another thing which they had in common was the fact they both fought in world war one. With some of Owens poems Sassoon actually contributed and helped with the final version. The poems which Sassoon did this for are "Dulcet et Decorum est" and some others. The poems I am going to look at are "Exposure" and "Disabled" by Wilfred Owen, and "Base Details" and "Suicide in the Trenches" by Siegfred Sassoon. Both Sassoon and Owens work are similar in the fact they both try and get the same message across. They both are against war. Sassoon and Owen had a particular audience they were aiming their poems at. They were aimed at people at home not truly affected by war their poems were a way to make people understand what war was really like. The rhyming Scheme in Sassoon and Owen poems are very similar. ...read more.

Again, in this poem there are many parts with double meanings. "Ghastly suit grey suit" this can mean either the man is grey and has lost his colour in his face or represents his mood or the grey pyjamas they are dressed in when they are injured giving the men no identity and the fact the army only see him as another statistic. Owen does this so try and get every tragic meaning across to make the reader realise what is really happening and to let the reader interpret the poem how they wish to. The poem also shows us how war ages people and steals their youth. "Voices of boys rang saddening" the victim is only a boy himself. Owen tries to get across how ironic war is. "in the old times" to this young boy 1 year earlier seems like a life time a go. When he didn't have any worries and only really cared about having enough money to go out. The readers knows the person in the poem is only a young boy, barely old enough to fight in the war, yet the rest of his life is ruined and he can no longer be a child as it has been taken away and he has been aged by war. ...read more.

The last poem I am going to study is another of Sassoon's called 'Suicide in the trenches.' The title is as exactly how it reads. Through out the poem it refers to the soldiers as boys this is because most soldiers were vulnerable. Sassoon's poems are short but to the point "He put a bullet through his brain" Here Sassoon tells it like it is sometimes the simpler the message the easier it is to get across. This particular poem has three stanzas but the second stanza does not follow the same rhyming scheme as the other two this is because Sassoon wants it to stand out. In the third stanza Sassoon addresses the reader "you" this is because he wanted the reader to realise what was truly happening. My conclusion to all four poems is they all had a similar message and were aimed at the same audience. I found Sassoon's poems more effective as they were short, sharp and straight to the point. Owen's poems were longer, I feel this is because Owen does not like to leave any details out no matter how minor. To get the full picture you need all the facts where as Sassoon gets his message across blunter to shock people making it stick in people's minds. By Tyler Littleboy ...read more.