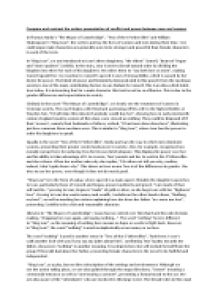 Compare and contrast the writers presentation of conflict and power between men and women In Thomas Hardys The Mayor of Casterbridge, Tess of the DUrbervilles and William Shakespeares King Lear,

﻿Compare and contrast the writers presentation of conflict and power between men and women In Thomas Hardy?s ?The Mayor of Casterbridge?, ?Tess of the D?Urbervilles? and William Shakespeare?s ?King Lear?, the writers portray the lives of women and men during their time. One could argue male characters are generally seen to be stronger and powerful than female characters in each of the texts. In ?King Lear?, we are introduced to Lear?s three daughters, ?the eldest? Goneril, ?dearest? Regan and ?more opulent? Cordelia. In the story, Lear is seen to break natural order by dividing the kingdom into three for each of his daughters. He orders them to ?say doth love us most?, making Goneril speak first. Our reaction to Goneril?s speech is one of strong dislike, which is caused by her desire for power. The blend of power and femininity demonstrated in this speech from the Jacobean society is one of the main contributing factors to our disdain for Goneril. This is an idea which holds true today. It is interesting that for a male character this trait is not be so offensive. This is due to the gender differences and expectations in society. Similarly in the novel ?The Mayor of Casterbridge?, we clearly see the treatment of women in Victorian society. The novel begins with Henchard auctioning off his wife to the highest bidder at Weydon Fair, ?I?d sell mine this minute if anybody would buy her?, showing how in early nineteenth century England country women of this class, were viewed as nothing. They could be disposed of if their ?owners?, namely their husbands or fathers, wished, ?it has been done elsewhere?, illustrating just how common these auctions were. ...read more.

One could say Tess is ?more sinned against? as Hardy uses another theme of fate and free will as a symbolism for Tess? life. She uses her free will to choose or determine her own actions; however these actions she makes, seems like fate always brings her down. In comparison Henchard in ?The Mayor of Casterbridge? could possibly be seen as ?more sinned against? as well as ?sinning?. Henchard had sold his wife displaying him ?sinning?, however on the other hand one could possibly argue how it was not his fault as it was his fate and he cannot change his actions, making him ?more sinned against?. This could create sympathy for Henchard although he has done wrong, where usually the sympathy is for the female characters. In ?King Lear?, Shakespeare uses pathetic fallacy by using a storm in Act 3 to conclude Lear?s insightful decisions. The storm is presented as a microcosm of Lear?s madness, as he encourages the storm to continue he shouts ?Blow winds and crack your cheeks!?. Lear personifies the wind as he asks the elements to destroy him, ?his little world of man? as he sees no importance of man or nature after his death. This shows how the word ?man? is the centre of importance and how the power of the storm is imagined to be originating from Lear, a male character. The ?fretful elements? are metaphors for Goneril and Regan where Lear is contending with his family. Kent being disguised gives the knight ?a ring? for Cordelia, being symbolic as the shape of a circle is seen with the ?one bearing a coronet?. This could also be seen with Edmund using a dramatic device, holding a ?letter?. ...read more.

Elizabeth ?Jane begins to like Farfrae as she believes "he seemed to feel exactly as she felt about life", presenting how although she has no mother figure to look out for her, her strong insight helps her to continue her life. As Susan left Henchard a letter explaining how Elizabeth-Jane was not his daughter, it seems as if he ?disowned? her by making her leave his house. The mother figure was seen to have a responsibility which Henchard as a male could not adapt to although Elizabeth-Jane was seen to be a step daughter to him. Differently Hardy uses the mother figure in ?Tess of the D?Urbervilles? however she is not present too often. We see her control Tess unlike in ?King Lear? and ?The Mayor of Casterbridge? where there is a father figure with no sense of control. Tess is made to go to the D?Urberville?s house by her mother, where one could say Tess? misfortunes began. She could represent time as although she is seen to be uneducated she still believes in ?old superstitions?, ?Between the mother, with her fast- perishing lumber of superstitions, folk-lore?? Mrs Durbeyfield could also represent pre-industrial England with the ?folk-lore? at that time. Both writers discuss the theme of women, however they are portrayed differently. ?King Lear? focuses on women gaining power and having control over the male characters. The female characters in ?The Mayor of Casterbridge? again have different roles, although this is mainly because the novel is set in the Victorian period where women?s roles were to take care of their husbands and children. Lastly ?Tess of the D?Urbervilles? displays how male characters have a strong control over women, and how this affects their overall lives. Sera Exton 13G ...read more.