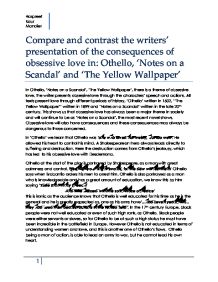 Compare and contrast the writers presentation of the consequences of obsessive love in: Othello, Notes on a Scandal and The Yellow Wallpape

Compare and contrast the writers' presentation of the consequences of obsessive love in: Othello, 'Notes on a Scandal' and 'The Yellow Wallpaper' In Othello, 'Notes on a Scandal', 'The Yellow Wallpaper', there is a theme of obsessive love. The writer presents obsessive love through the characters' speech and actions. All texts present love through different periods of history, 'Othello' written in 1602, ''The Yellow Wallpaper'' written in 1899 and 'Notes on a Scandal' written in the late 20th century. This shows us that obsessive love has always been a major theme in society and will continue to be as 'Notes on a Scandal', the most recent novel shows. Obsessive love will also have consequences and these consequences may always be dangerous to those concerned. In 'Othello' we learn that Othello was 'one who loved not wisely, but too well'. He allowed his heart to control his mind. A Shakespearean hero always leads directly to suffering and destruction. Here the destruction comes from Othello's jealousy, which has led to his obsessive love with Desdemona. Othello at the start of the play is portrayed by Shakespeare, as a man with great calmness and control. 'Keep up your bright swords, for the dew will rust them' Othello says when Brabantio orders his men to arrest him. Othello is also portrayed as a man who is knowledgeable and has a great amount of education, we know this by him saying 'Rude am I in my speech And little blessed with the soft phrase of peace' this is ironic as the audience knows that Othello is well educated for his time as he is the general and he is greatly respected as, one as his arms have'...had seven years pith... they had used their dearest actions in the tented field'. In the 17th century Europe, black people were not well educated or even of such high rank, as Othello. ...read more.

Barbara is in love with Sheba also obsessively, Barbara is the woman who also writes the diary based novel. Barbara feels that she needs someone in her life that she can love as well as control and for them to love her back, she wants to be the only friend that they have, and at the end she may be the only friend Sheba has as the end Barbara says that 'she (Sheba) knows, by now, not to go too far without me'. In Sheba's first encounter with Connolly, she was 'touched by his child like posture of concentration' and that 'his upper body had a solid, triangular look'. This I believe could have been what sparked Sheba's interest in Connolly at the beginning of her obsessive love affair. This is also very similar when compared to Othello, to the fact that Desdemona came to listen to Othello's stories with a 'greedy ear'. This was too what sparked Othello's interest in Desdemona. It can be argued that Connolly played an equal part in the love affair as he came to see Sheba 'every day that week' when Sheba was trying to avoid him. Connolly, when coming to see Sheba out of school hours ,was 'simply anxious to please'; Connolly had 'observed that Sheba liked him best when he was saying sensitive things'. Here the writer depicts Connolly as a typical teenage boy who will 'trick out his stall with an eye to what would please the customer'. It can be said, therefore that Connolly manipulates Sheba to get what he wants. Barbara's first encounter with Sheba was when she was dealing with Connolly for creating trouble with Sheba, but she had seen Sheba beforehand and described her hairstyle of one 'film actresses wear when they're playing sexy lady doctors' and on finding that Sheba was a pottery teacher she described it as being 'too perfect'. ...read more.

This is a shock to the reader as the husband seems very calm and considerate although controlling, and because of his obsessive actions, the wife suggests that 'it does not do to trust people too much'. Here it can be argued that because of her husband's obsessiveness, the wife may have lost all trust in him. I believe that the husband being a doctor, he must undoubting trust his diagnosis, and made a wrong decision here. The husband is very similar to Othello, Barbara and Sheba as he allows his heart run his mind, he is a doctor and should therefore be thinking logically but he does not which feeds to his obsessive love for his wife and for her mental illness to deteriorate. As the diary is written from the wife's point of view, could it be argued that because of her mental illness could paranoia make her an unreliable narrator? Therefore makes her think that there is a lady stuck in the wallpaper, when it was actually her, as the wife says she 'shall have to get behind the pattern when it comes night' this is also an image of captivity and inability to change her situation. In conclusion, to my essay, the writer's present obsessive love as having dark, dangerous, disturbing consequences for the main protagonists. We learn by looking at the texts that in 'Othello', Othello kills Desdemona because of Iago's lies. The wife in 'The Yellow Wallpaper' becomes mentally ill because of the lack of love and understanding of her condition at the beginning. In 'Notes on a Scandal', Sheba is looking at imprisonment when she finally surrenders her actions, which was due to Barbara for telling of her love affair to Bangs. All the women, in the texts, were misunderstood by their lovers, because of the control and obsessiveness each man/women had over them. Obsessive love has had extreme outcomes, as Othello, Barbara, Sheba and the Husband's heart controlled their minds and destroyed their relationship in the end, each character in turn looses there love either through death or through mistakes of their own. ...read more.