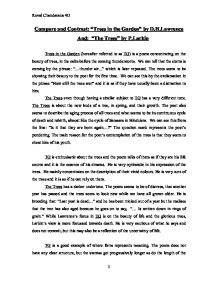 Compare and Contrast: "Trees in the Garden" by D.H.Lawrence And: "The Trees" by P.Larkin Trees in the Garden (hereafter referred to as TG) is a poem concentrating on the beauty of trees, in the calm before the coming thunderstorm. We can tell that the storm is coming by the phrase: "...thunder air..." which is later repeated. The trees seem to be showing their beauty to the poet for the first time. We can see this by the exclamation in the phrase "How still the trees are!" and it is as if they have usually been a distraction to him. The Trees even though having a similar subject to TG has a very different tone. The Trees is about the new buds of a tree, in spring, and their growth. The poet also seems to describe the aging process of all trees and what seems to be its continuous cycle of death and rebirth, almost like the cycle of Samsara in Hinduism. We can see this from the line: "Is it that they are born again...?" The question mark represents the poet's pondering. The main reason for the poet's contemplation of the trees is that they seem to cheat him of his youth. ...read more.

This is another example of the uniformity, mentioned earlier. But I think this may be representing the life cycle of the trees. The first line of each stanza represents growth. The middle two lines represent constancy, strength and flourishment but also aging. The last line represents fading and death. TG is a poem of description, therefore it is obvious that the adjectives used, paint a very clear picture. Many of the adjectives used refer to colour: "... creamy-coloured... ivory white among the rambling greens... variegated elder...grey-blue blueness...leaves red-rosy... green grass glows..." The last two of these phrases are very striking. The reason the poet uses the phrase "red-rosy" is to avoid the clich�d phrase rosy-red. He may also have done this to alter the effect he is trying to create, by disrupting the reader's expectation. The reason for doing this was probably to remind us that within the next few minutes the whole image he is describing will be washed away. The other phrase "...green grass glows..." is also noticeable because of the use of the word "glows". You would expect the grass to look dull because of the lack of sunlight, but again it is emphasis on the fact that nothing is, as it seems. ...read more.

Unlike in TG, there is repetition. In the last line of the last stanza: " Begin afresh, afresh, afresh." I believe the poet has done this to remind us that even though he has described the tree's cycle once, it does happen annually. The enjambment in this poem usually every two lines, this maybe another representation of the cycle of life. The full stops may be symbolizing death, as if it is a necessity. The two poems have very different moods, even though they are both about trees. While TG is very descriptive of the beauty and nature of what the poet sees, The Trees is more philosophical and is trying very hard to make a connection between trees and humans. He achieves this very well in the poem, but to understand the real meaning we cannot take the poem for its face value. Where as in TG we can because it is just an illustration of what the poet sees. The moods are both very different, in that while TG is very praising of the trees, The Trees is almost grieving about the constant youth that we as humans can never have. Indirectly though, both the poems are illustrating the majesty of trees. While one pictures the exterior beauty the other depicts their interior strength and ability of revitalization. Keval Chandarana 4U 1 1 ...read more.