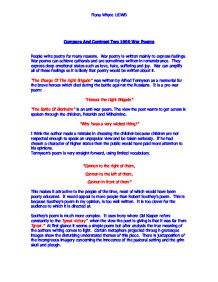 Compare And Contrast Two 1900 War Poems People write poetry for many reasons. War poetry is written mainly to express feelings. War poems can achieve catharsis and are sometimes written in remembrance. They express deep emotional states such as love, hate, suffering and joy. War can amplify all of these feelings so it is likely that poetry would be written about it. "The Charge Of The Light Brigade" was written by Alfred Tennyson as a memorial for the brave heroes which died during the battle against the Russians. It is a pro-war poem: "Honour the Light Brigade" "The Battle Of Blenheim" is an anti-war poem. The view the poet wants to get across is spoken through the children, Peterkin and Wilhelmine. "Why 'twas a very wicked thing!" I think the author made a mistake in choosing the children because children are not respected enough to speak an unpopular view and be taken seriously. If he had chosen a character of higher status then the public would have paid more attention to his opinions. ...read more.

He sounds as if he was programmed with what little information he has on the battle. He was unquestioning and when he tries to programme his grandchildren in the same way he dismisses their inquisitive minds in a way which seems patronising even to those so young. The words "great victory" have become his mantra and it seems this is all he knows about the battle. I find it sad Kasper found no need to form his own opinion of the battle. He is full of so much blind faith which he has learned seemingly by rote from unreliable sources. "And often when I go to plough, The ploughshare turns them out!" I imagine Old Kasper saying this in such a casual way that you would never dream he was talking about ploughing skulls! The image is highly ironic as ploughing is a way of rebirth and new life while in the piece of poetry they are harvesting death and bodies. The author expresses his view through the children, as mentioned before. ...read more.

You are not supposed to think about the answer to the question. Yours should be the same as the authors. Tennyson's poem is full of kinetic energy. As it is set in a battlefield it is very active. In comparison, Southey's poem is absolutely static. The tale does not leave the cottage door and field. "The Charge Of The Light Brigade" is more action packed. To close I would like to summarise that Tennyson's poem was written to boost the morale of the country. For that reason it is an unreliable narrative. It was not written from the heart as he was telling people what they wanted to hear. Southey's poem is more true to his own feelings. I respect this poem more as it was not a popular view of war at the time but he stood up for what he believed in which was peace. Southey's undervalued, slight way of projecting his viewpoint may not have earned him as much money as Tennyson's exaggerated style but it was genuine which has earned him the respect he deserves from some if not many. ?? ?? ?? ?? Fiona Whyte 10JWB ...read more.