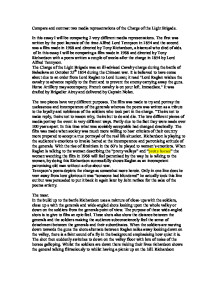 Compare and contrast two media representations of the Charge of the Light Brigade.

Compare and contrast two media representations of the Charge of the Light Brigade. In this essay I will be comparing 2 very different media representations. The first was written by the poet laureate of the time Alfred Lord Tennyson in 1854 and the second was a film made in 1968 and directed by Tony Richardson, a bisexual who died of aids. of In this essay I will be comparing a film made in 1968 and directed by Tony Richardson with a poem written a couple of weeks after the charge in 1854 by Lord Alfred Tennyson. The Charge of the Light Brigade was an ill-advised Cavalry charge during the battle of Balaclava on October 25th 1854 during the Crimean war. It is believed to have come about due to an order from Lord Raglan to Lord Lucan; it read "Lord Raglan wishes the cavalry to advance rapidly to the front and to prevent the enemy carrying away the guns. Horse Artillery may accompany. French cavalry is on your left. Immediate." It was drafted by Brigadier Airey and delivered by Captain Nolan. The two pieces have very different purposes. The film was made to try and portray the uselessness and incompetence of the generals whereas the poem was written as a tribute to the loyalty and nobleness of the soldiers who took part in the charge. ...read more.

"half a league half a league." The film makes the charge look more noble than the poem. It uses a full 670 horses and men. And has the trumpets blowing and the lances all moving from vertical to horizontal at the same time. The poem however, patriotic as it sounds from the third line down it already stresses the pointssness of it "All in the valley of death" In the poem the order to charge is a simple "Forward the light brigade! Charge for the guns" making it seem a much more innocent mistake to make when you charge for the wrong guns. The order in the film is a much more complex set of mistakes and showing the incompetence of Generals furthers. It shows that because it took so long to make I simple order Nolan got frustrated and was so excited he pointed to the wrong valley. It also blames the wording of Raglan to Brigadier Airey for the misinterpretation. When Cardinal sees whats wrong he says "what choice have we" to charging in the valley, this is similar to the poem's infamous line "theirs not to make reply" showing the soldiers had no say in the charge but still couragously went out to die for their country for no reason at all. ...read more.

These two contrasting things are the most powerful as they are what we leave with. They really sum up the difference between Richardson and tennyson's interpretations. Richardson portrays the charge as a total waste and shows how the generals were to blame and how badly war was run. Tennyson is showing how honourable and brave the soldiers who took part and not focusing at all on the negatives. Conclusion The poem written by tennyson offers the audience of the time a eulogy, people in the 1850's were much less likely to accept having criticism of their generals than people in the 1960's. Tennyson was focusing on the nobility of the ordinary soldiers and not pointing the finger at who's fault it was. Richardson however wrote his film in the 60's at the time of the vietnam war when people were much more willing to accept critisism of their countries war efforts. He doesn't criticize the ordinary soldiers but focuses more on the uselessness of the generals and how they don't have a clue whats going on. Richardson basically says that this complete waste of life could have been prevented had the generals been trained and knew what they were doing. He especially focuses in on Raglan and shows us he was an old incompetent fool who shouldn't have been anywhere neart a battlefield at his age. ...read more.