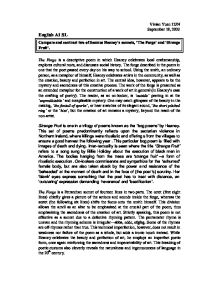 Compare and contrast two of Seamus Heaney's sonnets, 'The Forge' and 'Strange Fruit'.

Vivian Yuen 12JN September 18, 2003 English A1 SL Compare and contrast two of Seamus Heaney's sonnets, 'The Forge' and 'Strange Fruit'. The Forge is a descriptive poem in which Heaney celebrates local craftsmanship, explores cultural roots, and discusses social history. The forge described in the poem in one that the poet passed every day on his way to school. Using the smith, an ordinary person, as a metaphor of himself, Heaney celebrates artists in the community, as well as the creation, beauty and perfection in art. The central idea, however, appears to be the mystery and sacredness of this creative process. The work of the forge is presented as an extended metaphor for the construction of a work of art in general (in Heaney's case the crafting of poetry). The reader, as an on-looker, is 'outside' peering in at the 'unpredictable' and inexplicable mystery. One may catch glimpses of the beauty in the making, 'the fantail of sparks', or hear snatches of its elegant sound, 'the short pitched ring' or the 'hiss', but the creation of art remains a mystery, beyond the reach of the non-artist. ...read more.

The pentameter rhyme is uneven and the rhyming scheme is irregular-abba, cddc, efgfeg. Some of the rhymes are off-rhymes rather than true. This technical imperfection, however, does not result in weakness nor failure of the poem as a whole, but adds a ironic touch instead. While Heaney celebrates the beauty and perfection of art, he employs an imperfect poetic form, once again reinforcing the sacredness and impenetrability of art. This breaking of poetic customs also cleverly reveals the naturalness and ingenuousness of language in the 20th century. Strange Fruit is also a sonnet. The octet is the descriptive section of how the girl (symbolized as the 'strange fruit') is exhumed, and a more detailed elaboration of how she looks. The line 'Diodorus Siculus confessed' suggests a break in the poem with a change of present to past tense. Here we move from the description of the body's head in the here and now (present tense) ...read more.

The use of figurative language in 'dark as a turf clod' helps to capture both the visual aspect of the girl's head and its association with the earth, the soil. The repetition of the girl's 'outstaring' expression is strong. She seems to have strength and resistance to letting others turn her into an object of worship or 'reverence'. Sound is a key pictorial feature in The Forge. The word 'sparks' suggests a sound of colour and vibrancy. Onomatopoeic sounds such as 'ring', 'hiss', 'slam' and 'flick' bring about a musical quality, alliteration in 'grunts and goes' effects in the sounds of the smith's work, whereas the flat 'e' and 'a' sounds in 'somewhere', 'square' and 'altar' provide a background resonance of weight and heaviness, highlighting the weight of the anvil and its central importance. Sound is also essential in Strange Fruit. Soft, delicate sounds such as in 'unswaddled', 'wet fern of her hair' and 'her leathery beauty' contrast distinctly with the ugly depiction of the 'exhumed' head. Alliteration of the 'p' sound in 'pash' and 'perishable' is explosive, and the painful 'b' in 'broken nose' emphasizes the reality of the girl's deadness. ...read more.