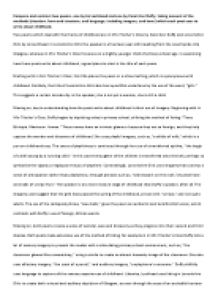 Compare and contrast two poems, one by Liz Lochhead and one by Carol Ann Duffy, taking account of the methods (situation, form and structure, and language, including imagery, and tone) which each poet uses to write about childhood.

Transfer-Encoding: chunked ﻿Compare and contrast two poems, one by Liz Lochhead and one by Carol Ann Duffy, taking account of the methods (situation, form and structure, and language, including imagery, and tone) which each poet uses to write about childhood. Two poems which deal with the theme of childhood are In Mrs Tilscher?s Class by Carol Ann Duffy and Lanarkshire Girls by Liz Lochhead. In Lanarkshire Girls the speaker is a fourteen year old travelling from the countryside into Glasgow, whereas In Mrs Tilscher?s Class focusses on a slightly younger child of primary school age. In examining how these poets write about childhood, a good place to start is the title of each poem. Starting with In Mrs Tilscher?s Class, this title places the poem in a school setting, which is synonymous with childhood. Similarly, the title of Lanarkshire Girls also has a youthful undertone by the use of the word, ?girls.? This suggests a certain immaturity in the speaker; she is not yet a woman, she is still a child. Moving on, key to understanding how the poets write about childhood is their use of imagery. ...read more.

Likewise, in Lanarkshire Girls Lochhead hints that for these girls their childhoods cannot last forever by mentioning, ?doctors? surgeries, the crematorium.? Even though it is a poem about the excitement of late childhood, the facts of life and death are inescapable. Both Duffy and Lochhead convey that children cannot be sheltered from the real world forever, and will eventually have to grow up and face the trials of life. The final aspect to note about the imagery is the s****l undertones that are introduced in the poems. In Lanarkshire Girls this aspect is introduced at the very start: ?Summer annoyed us thrusting? like a boy.? Summer is personified as an annoying boy, capturing the fact that these girls are beyond the playful stages of childhood and are progressing into puberty. Likewise, the final stanza of In Mrs Tilscher?s Class captures similar sentiments through phrases such as, ?the air tasted of electricity? under the heavy, sexy sky.? This use of synaesthesia captures the upheaval of hormones and physical changes that come with the end of childhood and the onslaught of puberty. Childhood cannot last forever; at some point we must leave primary school behind and mature, both physically and mentally. ...read more.

Coloured shapes.? Through this method Duffy captures the variety of pace during childhood, primary school in particular. She also frequently uses enjambment, such as, ?Mrs Tilscher smiled / and turned away.? The effect of this method is that the lines of the poem flow into each other, creating a sense of time passing as the speaker progresses through her childhood. Lochhead also uses frequent enjambment, such as, ?our country bus sped / past the city stops.? In this case the enjambment helps create a sense of movement and excitement as the girls embark on their journey at the end of their childhood, on the cusp of womanhood. Contrastingly, Lochhead does not use any short, sharp sentences; she prefers longer, listing ones. Perhaps this is to reflect how we mature with age and are able to appreciate more detail in the world around us in later childhood, compared to the simply understanding we have in primary school. To conclude, both Duffy and Lochhead skilfully write about childhood and the progression into puberty using many methods, the most effective of which I believe is their vivid use of imagery. Both poets create works that resonate with the reader and allow us to re-live our own childhood experiences through the eyes of the speaker. ...read more.