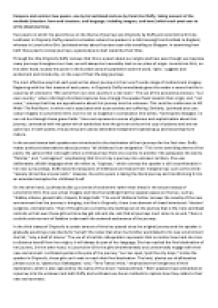 Compare and contrast two poems, one by Liz Lochhead and one by Carol Ann Duffy, taking account of the methods (situation, form and structure, and language, including imagery, and tone) which each poet uses to write about journeys.

Transfer-Encoding: chunked ﻿Compare and contrast two poems, one by Liz Lochhead and one by Carol Ann Duffy, taking account of the methods (situation, form and structure, and language, including imagery, and tone) which each poet uses to write about journeys. Two poems in which the poets focus on the theme of journeys are Originally by Duffy and Lanarkshire Girls by Lochhead. In Originally Duffy presents a situation where the speaker is a child moving from Scotland to England, whereas in Lanarkshire Girls Lochhead writes about fourteen year olds travelling to Glasgow. In examining how both these poems convey journeys, a good place to start would be their titles. Through the title Originally Duffy conveys that this is a poem about our origins and how even though we may take many journeys throughout our lives, we will always be irreversibly tied to our place of origin. Lanarkshire Girls, on the other hand, locates the poem in the Scottish area of Lanarkshire and the word, ?girls,? suggests and excitement and immaturity, on the cusp of their life-long journeys. The most effective way that each poet writes about journeys is their use if a wide range of methods and imagery. Beginning with the first stanzas of each poem, in Originally Duffy immediately gives the reader a sense that this is a journey of unknowns: ?We came from our own country in a red room.? The use of the possessive pronoun, ?our own country,? ...read more.

There is a subtle undercurrent of fatalism underneath the outward exuberance of the journey. In the third stanza of Originally a certain amount of time has passed since the original journey and the speaker is gradually assuming a new identy for herself. She notes that when her brother assimilated to his new environment she felt, ?only a skelf of shame.? The use of a Scottish colloquialism represents that no matter how hard she tries to distance herself from her origins, it will always be part of her language. She has reached the final destination of her journey. On the other hand, in Lanarkshire Girls the girls wholeheartedly and unreservedly engage with their new environment. Lochhead quickens the pace of the journey: ?our bus sped / past the city stops.? Unlike the speaker in Originally, these girls can?t wait to reach their final destination. The hard, plosive use of alliterative phrases such as, ?glamorous Gallowgate,? and, ?Terry Tattoo Artist,? emphasises the foreignness of their destination, which is also captured by the name of the street: ?Jamaica Street.? Both speakers have embarked on a journey into the unknown and both Duffy and Lochhead use clever methods to capture how they relate to their new environments. Furthermore, the tone of each poem reflects the journeys that are written about. In Originally Duffy uses a tonal shift. ...read more.

On the other hand, Lanarkshire Girls is written in free verse meaning that it has no rhythm nor rhyme scheme. Again, this conveys that the journey presented by Lochhead is much more spontaneous and exciting than the predetermined and anxious journey that Duffy presents. In terms of the poets? diction, in Originally Duffy uses punctuation and varied sentence structure to full effect when depicting journeys. For example, in the second stanza she writes, ?some are slow, / leaving you standing, resigned.? This long sentence is broken up by several commas which emphasises the unhurried pace of the journey. This is immediately juxtaposed by a caesura followed by a short, staccato sentence, ?others are sudden.? Duffy cleverly captures the unpredictable fluxuation in pace that childhood journeys can bring. On the other hand, Lochhead uses long and detailed sentences in Lanarkshire Girls. For example, the entire second stanza is one sentence. This suggests that the journey of puberty is more full-on and unrelenting than the slower journeys of childhood. Moreover, another similarity between the two poems and how they depict journeys is that both use frequent enjambment between lines to replicate the fluid motions of a car or bus journey. To conclude, both Duffy and Lochhead skilfully use many poetic methods to capture the turmoil and excitement of journeys taken during childhood and adolescence. At the conclusions of both poems, even though the particular journeys being written about have ended, the reader gets the sense that their true journey throughout life is only beginning. ...read more.