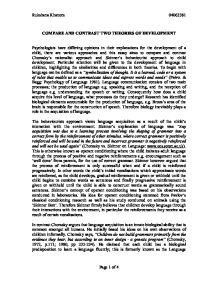 COMPARE AND CONTRAST TWO THEORIES OF DEVELOPMENT Psychologists have differing opinions in their explanations for the development of a child, there are various approaches and this essay aims to compare and contrast Chomsky's rationalist approach and Skinner's behaviourist approach to child development. Particular attention will be given to the development of language in children, highlighting the similarities and differences in both theories. To begin with language can be defined as a "symbolisation of thought. It is a learned, code or a system of rules that enable us to communicate ideas and express words and needs" (Paivo. & Begg: Psychology of Language 1981). Language communication consists of two main processes; the production of language e.g. speaking and writing, and the reception of language e.g. understanding the speech or writing. Consequently how does a child acquire this level of language, what processes do they undergo? Research has identified biological elements accountable for the production of language, e.g. Broca's area of the brain is responsible for the construction of speech. Therefore biology inevitably plays a role in the acquisition of language. The behaviourists approach views language acquisition as a result of the child's interaction with the environment. Skinner's explanation of language was "Any acquisition was due to a learning process involving the shaping of grammar into a correct form by the reinforcement of other stimulus, where correct grammar is positively reinforced and will be used in the future and incorrect grammar is negatively reinforced and will not be used again" (Chomsky vs. ...read more.

By the age of 3 the child can construct 3 word sentences, and by the age of 6 years the child's grammar becomes more complex and continues to grow until they reach adult level. During this whole process Chomsky claims that the child is mastering its predisposed rules and transforming them progressively. Hence the "task for young language learners is to discover which particular language community they are in and apply the universal rules of language to that particular version" (Lee and Das Gupta, 1995). Therefore according to Chomsky language development is instantaneous, where the grammatical structures of an adult exists at birth, and that these structures develop and mature like physical growth. When considering the acquisition of vocabulary, Skinner suggests that the child individually learns words and receives reinforcements for the use of these words. This is supported by Clarke and Stewart 1973 (Clarke-Stewart A (1973) "Interactions between mothers and their young children: characteristics and consequences.") who found that children's, whose mothers communicated with them regularly, had a much larger vocabulary than children's whose mothers rarely communicated with them. Chomsky to a certain extent agrees with this idea, as he did propose that a child does attain most of their language from the environment. However he claims that the child may hear words from the environment but the rules from his innate universal grammar helps him/her to transform these newly acquired words and apply it to different contexts. ...read more.

The acquisition of language is a very complex process, and cannot be explained merely in terms of the innate principles of universal grammar or to the operant conditioning of parents as there are many factors involved. Chomsky for instance claims that the child from birth possesses an "instantaneous emergence of mature grammar" (Crain. W., Theories of Development), it can be argued that this is too specific as Chomsky it seems is regarding the infants as "miniature adults" where language is concerned. (Crain. W., Theories of Development). Similarly Skinner can be criticised for placing too much emphasis on the environment "linguistic data-however transparent-will never be sufficient for language development" (Harris. M., Language Experience and Early Language Development 1993). Therefore both theories can be criticised for being too specific in their ideas. However on a more positive note both theories have expanded and encouraged the understanding of language development. Subsequently it may be more ideal to adopt an interactionist perspective which would claim that "the course of development will be the outcome of an interaction between the child's own processing abilities and experience" (Harris. M., Language Experience and Early Language Development 1993). Considering the substantial amount of evidence linked to Chomsky's research it can be concluded that the concept of innateness plays a more significant role in the acquisition of language than the idea of learning language via operant conditioning. Therefore for this reason the idea of an innate language system is more favourable, but only with the addition of some input from the linguistic environment. ...read more.