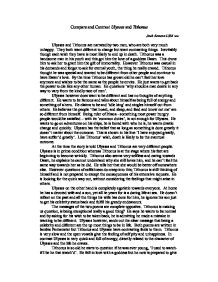 Compare and Contrast Ulysses and Tithonus Josh Benson LSM ww Ulysses and Tithonus are narrated by two men, who are both very much unhappy. They both want different to change but want contrasting things. Inevitably though each wish they have is most likely to end up in death. Tithonus was a handsome man in his youth and this got him the love of a goddess Dawn. This drove him to ask her to grant him the gift of immortality. However Tithonus was casual in his demands and forgot to ask for eternal youth, the thing he really craved. Tithonus thought he was special and wanted to be different from other people and continue to have Dawn's love. By the time Tithonus has grown old he can't feel her love anymore and wishes to be the same as the people he envies. He just wants to get back the power to die like any other human. He questions 'why should a man desire in any way to vary from the kindly race of men'. ...read more.

He tells her that she would be better off somewhere else. However questions of selfishness do creep into this; Tithonus is still thinking of himself and is not prepared to except the consequences of his extensive requests. He is looking for the quick way out, without considering the feelings that might arise in others. Ulysses on the other hand is completely egotistic towards everyone. At home he has a devoted wife and a son, yet all he years for is a daring life at sea. He doesn't reflect on the past and all the things his wife has done for him, he ignores his son just to get his celebrity status back and fulfil his greedy endeavours. The messages of the two poems are complete opposites. Tithonus is making us question, is being exceptional really a good thing? He says he wants to be normal and by asking for his wish to be taken back, he is admitting he made a mistake in wanting to be different. Ulysses however, sends out the clear message that being a celebrity and different are the up most things to be in life. ...read more.

She cares for him, looks after him and even feels guilty for granting him his wish. Tithonus however des nothing to change her views and just begs her to take it back and accuses her for his problems, all shown in the line 'beat me down and marr'd and wasted me'. Here he blames her for a mistake he made when asking for his gift. Ulysses is the same, his wife has waited twenty years for his return and remained his wife and yet he doesn't spare a thought for the misery he will cause her by leaving. As long as he is happy he doesn't care what happens to others. He believes his son becoming king will make up for the loss of his father. Tithonus and Ulysses both come across as miserable people. They have the same basic reason for this feeling; they both want their lives to change dramatically but for different reasons. Ulysses wants more adventure in his and Tithonus wants to do the thing to stop life completely, die. They both have similar characteristics; they are selfish, impetuous and quick to blame others. Overall the poems have the feeling of sadness but one is quicker, one is sad to contrast the two wishes they have. ...read more.