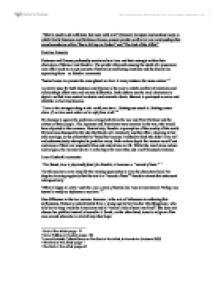 "Here's much to-do with hate, but more with love" (Romeo). Compare and contrast ways in which David Guterson and Grahame Greene present painful conflict in love relationships that cross boundaries within "Snow falling on Cedars" and "The End of the Affair" Caroline Finnerty Guterson and Greene profoundly scrutinize how love and hate entangle within their characters of Ishmael and Bendrix. The painful aftermath ensuing the death of a passionate love affair leads to an apt account of internally conflicting emotions and the blurry line separating them - as Bendrix comments: "hatred seems to operate the same glands as love: it even produces the same actions"1 A pivotal issue for both Guterson and Greene is the way in which conflict of emotions and relationships affect men and women differently. Both authors use the male characters to depict a selfish love centred on desire and romantic ideals. Ishmael is portrayed as naive and childlike in his blind dreams: "Love is the strongest thing in the world you know. Nothing can touch it. Nothing comes close. If we love each other we're safe from it all."2 He chooses to ignore the problems arising both from the war and Pearl Harbour and the culture of their people. The Japanese and Americans were enemies in the war, who would have objected to the romance. Dissimilarly, Bendrix is perceptive of the cruelty of the world. He becomes obsessed by the idea that Sarah will eventually end the affair, returning to her safe marriage, to the extent that he "hated her because I wished to think she didn't love me" and subconsciously attempted to push her away. Both writers depict the women as self less and aware of their real responsibilities and restrictions in life. Whilst the men blame culture and religion, the women turn to it in the hope for more than just a self focussed existence. Laura Kryhoski comments: "For Sarah, love is physically fatal, for Bendrix, it becomes a "record of hate."3 Yet this seems to over simplify the varying approaches to love the characters hold. ...read more.

Ishmael too shares this sort of sickness, his personal obsession towards Hatsue preventing him moving on with his life. He finds empty relationships because he cannot let go: "'he slept with them angrily and unhappily and because he was lonely and selfish'" 14 Sickness is used alternatively in "The End of the Affair" through Mr Parkis and his son. Mr Parkis' boy is healed by Sarah's love, "Mrs Miles who came and took the pain away", suggesting that eventually love and mercy conquer misery. This could depict that ultimately God's love will rescue Bendrix from his 'sickness' in as it rescued Sarah from her suffering. There is no such chance of spiritual rescue in "Snow Falling on Cedars" as Ishmael is expected to move on alone. Yet in the absence of God Ishmael finds refuge in family: "'What else do we have?' replied Ishmael. 'Everything else is ambiguous. Everything else is emotions and hunches. At least the facts you can cling to; the emotions just float away.' 'Float away with them,' said his mother.' If you can remember how, Ishmael. If you can find them again. If you haven't gone cold forever.'"15 An epistolary style is used to explore painful relationships from varying views. In "Snow Falling on Cedars" we see Hatsue's letter to Ishmael and the ocean report whilst in "The End of the Affair" we see Parkis' reports, Sarah's diary, Sarah's letter and Parkis' letters to expand our ability to understand the situation. Critic A. A. DeVitis spoke of this technique in "The End of the Affair": "Greene's use of the diary and of the journal allows him not only to characterize his people but also to portray the various levels of meaning of the spiritual drama enacted. Bendrix looks at Sarah; Sarah looks at herself as she looks at God. The Bystanders look at Sarah, and she leaves her mark on them."16 This seems to be an accurate review because the diary allows Greene to give us a true insight into his characters. ...read more.