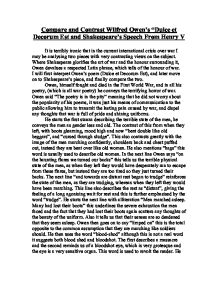 Compare and Contrast Wilfred Owen's "Dulce et Decorum Est and Shakespeare's Speech From Henry V It is terribly ironic that in the current international crisis over war I may be analysing two pieces with very contrasting views on the subject. Where Shakespeare glorifies the art of war and the honour surrounding it, Owen devalues a respected Latin phrase, which tells of the honour of war. I will first interpret Owen's poem (Dulce et Decorum Est), and later move on to Shakespeare's piece, and finally compare the two. Owen, himself fought and died in the First World War, and in all his poetry, (which is all war poetry) he conveys the terrifying horror of war. Owen said "The poetry is in the pity" meaning that he did not worry about the popularity of his poems, it was just his means of communication to the public allowing him to transmit the lasting pain caused by war, and dispel any thoughts that war is full of pride and shining uniforms. He starts the first stanza describing the terrible state of the men, he conveys the men as gender less and old. The contrast of this from when they left, with boots gleaming, mood high and now "bent double like old beggars", and "cursed through sludge". This also contrasts greatly with the image of the men marching confidently, shoulders back and chest puffed out, instead they are bent over like old women. He also mentions "hags" this word is usually used to describe old women. In the next line Owen says "on the haunting flares we turned our backs" this tells us the terrible physical state of the ...read more.

He continues to depict the terrible image by using phrases such as "incurable sores on innocent tongues" and "froth-corrupted lungs", these create image of the body no longer being under the control of the man. The last two lines, are completely directed at the reader, playing on the guilt he has most certainly built up throughout the poem, he says "My friend" this is written in a sarcastic and bitter tone, were we are not really his friend, as we have put these men through these horrors. He then goes on " you would not tell with such high zest to children ardent for some desperate glory" this again is playing on the guilt of the reader. He then disgraces and devalues a very respected Latin line written by the old poet Ovid " Dulce et decorum est Pro patria mori" this means "it is sweet and fitting to die for your native land". While devaluing this statement, he is also devaluing war in itself, and he uses this last verse in a last gasp effort to appeal to the reader in a much more obvious way than all the other verse, through grotesque images. The most important component to the last verse, is that the tension is built in tremendous fashion. He achieves this by using only a single sentence in the whole verse, of which you only get the full meaning at the end of the sentence, which is that it is not sweet and fitting to die for your native land. This is a superb ending, and leaves the reader exactly how he would have wanted, thinking how is it possible for countries in this day in age to go to war. ...read more.

Both use specific events in Owen's case it was the death of a man from a gas attack and for Henry it was the oncoming war. The man in the poem was completely anonymous leading the audience to believe that it could be anyone, even them, whereas in the speech there is constantly names mentioned, letting the audience warm to the characters. You can constantly feel Owen's hatred of war and spite of anyone who puts people through it, however Henry is one of these people instilling exactly what Owen ridicules, the honour of dying for your country. In the poem the men have lost everything that makes them human, whereas in the speech they are going to gain what every human wants the respect of his fellow species. The end of the poem is a monosyllabic pounding "my friend you would not tell with such high zest" instils the poet's hatred for war, whereas Henry's speech is obviously building to a climax. The poem starts bleak, and ends bleaker, however the speech starts bleak but ends on a triumphant note. I actually prefer the poem, it is the most inspiring poetry I have ever read, and it perfectly recreates the image of the man dying, and lets you feel the poets hatred for war. However a good speaker can change the mind of even the most stubborn person, or at least make them think. Owen I am sure would be disgusted that nearly a century on from his death in a war we would be facing another, he would be most disappointed that his poetry had no effect. I think that if everyone stepped back they could most certainly find another solution, however in today's impatient society they want everything now. Chris Gallagher ...read more.

The essay writer is very sensitive to the quite different sentiments of the 'voices' in these two texts. Quotations are well chosen, and often quite skillfully introduced into the sentence structure of the essay. The linguistic analysis is well conducted generally, with a good comparison of the thrust of the two works.

Sentence and paragraph structure are loose and punctuation is frequently inadequate. As the essay writer says, both of these texts are poetry but little is said to compare the poetic devices and the effects they have on the reader.

More could be said of the very different contexts. In the Battle of Agincourt, the fighting was over in the day (though it was one episode in the Hundred Year's War), in The First World War, the trench warfare dragged on for 4 years, hence the gradual erosion of morale and spirit.